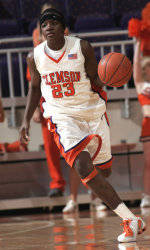 ATLANTA, GA – Lady Tiger D’Lesha Lloyd scored a season-high 17 points, two shy of her career high, but Clemson could not pull out the victory, falling by an 83-64 margin to Georgia Tech at the Alexander Memorial Coliseum on Sunday afternoon. The loss dropped the Lady Tigers to 8-13 on the year, 2-5 in the ACC, while the Yellow Jackets improved to 13-8 overall and 2-5 in conference action.

Although Clemson shot 44.2% from the field and held Georgia Tech to just 39.1% shooting, the Lady Tigers were unable to overcome a 47-point Yellow Jacket first half. Georgia Tech won the rebounding battle by a 47-25 margin and held Clemson’s leading scorer Maxienne White to just three points en route to the victory.

Yellow Jacket Chioma Nnamaka led all scorers with 22 points, while Kentrina Wilson and April Phillips also scored in double figures for Georgia Tech. Janie Mitchell led the squad on the boards with 11.

White picked up her second foul of the game with 16:31 remaining in the period, forcing her to the bench for the majority of the half. She remained scoreless at the break. Frist scored three straight baskets for the Lady Tigers to cut the Yellow Jackets’ lead to nine at the 8:55 mark. However, Georgia Tech held Clemson to just one field goal while on a 16-5 run to end the half leading 47-25.

The Lady Tigers opened the second half on a 12-6 run, led by seven points by Lloyd, in the first 4:23 of the period to narrow the gap to 16 points. Georgia Tech quickly regained control of the game and went back up by 20 points on a Nnamaka free throw. The Yellow Jackets extended their lead to as many as 28 points with 6:47 remaining and claimed the victory by an 83-64 margin.

Next up for the Lady Tigers is Boston College on Sunday, Feb. 5. Clemson will play host to the Eagles in a 4:00 PM match-up to be televised on the Regional Sports Network.