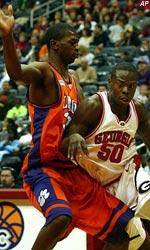 ATLANTA – Little-used Steve Newman scored a season-high 12 points – including a big 3-pointer late in the game – and Georgia held off Clemson 61-56 Saturday in the Peach Bowl Classic.

Damien Wilkins had 11 of his 13 in the second half for the Bulldogs (5-2), who rebounded from a 20-point loss to Winthrop of the Big South Conference in their previous game.

Newman, one of nine freshmen on the roster, is now 2-for-6 from beyond the arc this season, after hitting one against Winthrop. A burly, 6-foot-8 forward, he had been averaging only 17 minutes a game, but nearly equaled that in the first half.

He had nine points in 13 minutes before the break, helping Georgia trail only 31-29, and he finished with 23 minutes of playing time.

Clemson took its last lead at 47-46 on a 3-pointer by Olu Babalola – his only basket of the game – then Chris Daniels put the Bulldogs ahead to stay with a wild hook.

After Sharrod Ford missed on the other end, Wilkins clanged a layup hard off the backboard and missed the rim entirely. He grabbed the rebound, then passed out to Newman at the top of the key, with the shot clock at 4.

Newman calmly drained the shot, boosting the lead to four, and Georgia hung on from there.

Chris Daniels helped seal it by following up his own miss with 38 seconds left, giving the Bulldogs a 59-54 lead.

Babalola came in averaging 12.4 points but never got it going, finishing 1-for-7 from the field.

Wilkins, after a 1-for-7 effort before the break, scored five points early in the second half to give Georgia a 40-35 lead. The Tigers rallied to tie it at 40, thanks to a 3-pointer and two free throws from Christie.