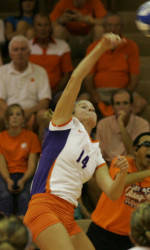 During the second match of the day, the Tigers were able to take the first set before dropping the final three to a fired-up Eastern Illinois club. Clemson allowed EIU to hit a season-best .228, despite registering 15.0 blocks.

Sandra Adeleye led a balanced Tiger attack with 12 kills, and also picked up a team-high six blocks, giving her 17 total blocks in 11 sets in the tournament. The Tigers had a season-high eight solo blocks, led by Mo Simmons’ three.

Patzin had eight kills on the day, and Lacy Hayes, Serenat Yaz, and Simmons all finished with six kills. Hayes also had 20 assists, splitting time with Brenner, who added ten of her own.

The Tigers won the first set, 25-21 behind .233 hitting and .070 hitting defense. Illinois native Natalie Patzin had five kills in the set to lead the Tigers. However, a scrappy EIU team fought back in the second set, going on a 14-4 run to close out the set, knotting the match at one-all. The Panthers hit .409 during the frame. The Panthers then took the third set to take a 2-1 match lead, hitting .302 with 20 kills.

Eastern Illinois was able to close out the match with a 25-22 win in the fourth set as well. Clemson trailed by as many as nine (17-8) in the third set, but fought back to make it a three-point game at 22-19 and chipped it to two at 23-21. But the Tigers were unable to complete the comeback, as EIU repeatedly used the Tigers’ aggressive blocking against them, using several ricochets for points.