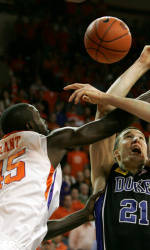 It was last February when the Blue Devils (16-3, 4-2 Atlantic Coast Conference) suffered their most lopsided defeat in nearly two decades, falling to the Tigers 74-47 at Littlejohn Coliseum.

Duke coach Mike Krzyzewski called time out in the final moments of that game, wanting his players to soak in the cheers of Tigers fans.

In this one, Smith and Duke’s defense ensured the Blue Devils a much happier finish.

Duke broke free from a 23-all halftime tie with six straight points to open the second half. After Clemson cut the lead to 29-28, Smith helped the Blue Devils take control.

Kyle Singler started the run with a 3-pointer, then Smith added another from long range. After Singler’s driving basket, Smith scored the next six points to put Duke ahead by 13.

Lance Thomas added 13 points, Singler 12 and Jon Scheyer 11 for Duke, which bounced back from a midweek defeat at North Carolina State.

Clemson lost its second straight to a ranked ACC opponent after falling at Georgia Tech this past Tuesday.

Clemson fans were ready for this one, even if their team wasn’t.

ESPN College GameDay broadcast from Littlejohn and about 4,000 orange-clad early risers turned out 10 hours before tip-off. A sign in the crowd before gametime summed up the mood: “Breathe if you hate Duke.”

After all, many in the crowd were still jacked up from the Blue Devils’ last visit–the 27-point Clemson victory here last winter was Duke’s most lopsided defeat since the 1990 national championship loss to UNLV.

Before losing here last season, though, Duke had won 22 straight over Clemson, including nine in a row on the Tigers’ home floor.

This time, both teams struggled to find offense early. The Blue Devils were 2 of 6 from 3-point range and made just one of four foul shots.

Clemson did even worse from the outside, going 1 of 6 behind the arc. While Booker was 5 of 7 in the half, his teammates were a combined 3 of 15.

Clemson did its part to keep the atmosphere going. One of the Tigers all-time greats, center Larry Nance was introduced during a timeout. Football star C.J. Spiller got an award at halftime, telling the cheering crowd to help the Tigers pull out a victory in the second half.

The Blue Devils avoided their first 0-4 slide on the road since 1981-82, although they’re 4-0 this season at neutral sites.

Before the game, Clemson held a moment of silence for Gaines Adams, the former Tigers and 26-year-old Chicago Bears defensive end who died of an enlarged heart last Sunday. The Greenwood native was buried Friday after a funeral service about 20 minutes from campus.