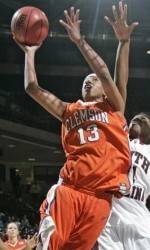 Greensboro, N.C. – Clemson concluded its 2004-05 season with a 66-55 defeat at the hands of the 22nd-ranked Maryland Terrapins in the opening round of the ACC Tournament from Greensboro Coliseum. The Lady Tigers finished 8-20 on the season. Maryland, who moves on to play #3 seed N.C. State on Saturday, upped its record to 20-8.

ACC Rookie of the Year Crystal Langhorne was impressive in her conference tournament debut, tallying a double-double with 24 points and 16 rebounds. Kalika France added 12 points for the Terps.

The Lady Tigers shot 31.1 percent from the field and hit just 1-13 from three-point range. Maryland shot 41 percent and outrebounded Clemson by 10 (45-35), but the Terps committed a game-high 20 turnovers.

Clemson guard Reggie Maddox led the way with 12 points. She hit 6-6 from the free throw line and also grabbed six rebounds and three steals. Maddox scored in double figures 15 times during her first year with the Lady Tiger program. Khaili Sanders added 10 for Clemson. It was the third time this season the 6-3 forward reached double figures. She hit 4-6 from the field.

Langhorne scored half of Maryland’s points in the opening period with 16. She went to the free throw line nine times in the half and got Clemson’s Maxienne White in quick foul trouble. With Clemson leading 6-3 early on, Anesia Smith sparked a 10-0 run with a pair of quick baskets.

The Lady Tigers battled to within three on a three-point play by Davis which made the score 18-15 in favor of the Terps. But Maryland countered with a 10-2 run of its own to stretch the lead to double digits. Clemson shot 28.1 percent in the half and scored 20 points, its second-lowest first half total this season.

In the second half, Clemson actually outscored Maryland 35-34. The Lady Tigers benefited from a tremendous effort at the free throw line. Clemson was 14-15 from the line in the second half and finished 16-18 for the game. It was the Lady Tigers’ best effort (88.9 percent) from the charity stripe all season.

Maryland came out on an 8-4 run to start the second half. The Terps built a 16-point lead on two occasions. Clemson trimmed the lead to single digits at 52-43, but Maryland came right back with a three-pointer by Shay Doron, jumper by France, and a pair of inside scores from Langhorne. That led to Maryland having its biggest lead at 61-44.