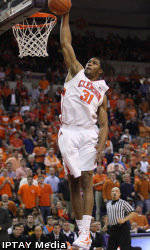 CHARLOTTESVILLE, VA – Virginia went on a 23-8 run in eight minutes to open the second half in a crucial stretch as Virginia defeated Clemson 65-61 on Tuesday at John Paul Jones Arena. The Cavaliers, who trailed at the half 30-26, improved to 18-3 on the season, 5-2 in the ACC. Clemson fell to 11-10 with the loss, 3-4 in league play.

Tanner Smith added 14 points, including 11 in the second half. Clemson shot 41 percent for the game, but Virginia shot an astounding 55.8 percent from the field and won the rebound margin 34-19.

Mike Scott was outstanding for the Cavaliers. The senior All-ACC candidate poured in a game-high 23 points. He was supported by Joe Harris’ five three-pointers and 19 total points.

Somewhat surprisingly, the two defensive-minded clubs came out exchanging baskets. The Tigers took an 11-10 lead on a layup inside by Catalin Baciu, but Scott answered with his fourth basket in the opening six minutes to make it a one-point UVA lead. A three by Joe Harris made it 15-11 in favor of the Cavs, but Baciu answered with another basket in the paint to cut it to two before even the first media timeout, which didn’t come until the 11:32 mark of the opening half.

Consecutive baskets by K.J. McDaniels pushed Clemson ahead 17-16, before an Akil Mitchell follow gave the lead right back to UVA as the defenses began to settle down. Clemson held a 23-20 lead after a third inside bucket by Baciu. But, Harris answered with two inside scores and the Cavaliers were back in front 24-23 at the 5:21 mark.

The Tigers held a 30-26 lead at intermission after holding Virginia to just two points over the course of the final five-plus minutes in the opening stanza. The Cavs hit just five of their last 15 field goal attempts, while Devin Coleman provided the final two points of the frame from the free throw line.

The second began much in the same fashion as the first, with the two teams hitting shots early on. Smith drilled his second three of the game, but Harris answered with a second trifecta of his own to pull UVA to within two at 35-33. Sammy Zeglinski followed with another triple, giving UVA its first lead since the opening half. UVA opened the lead to 41-35, its largest of the game, but Devin Booker answered with a three.

The lead extended to 49-38 in favor of the Cavs on an inside basket by Darion Atkins. Clemson trimmed the deficit to 51-45 on consecutive baskets by Smith, first a triple from the wing and then a leaner in the lane. Clemson cut it to five the next possession, but the Cavs responded with more outside shooting from Harris. He hit a three at 6:54 to push the lead right back to 10 at 56-46 before T.J. Sapp responded with a long ball of his own, his first since the Boston College game on Jan. 12.

The Tigers cut it to four on a pair of free throws by Booker with 3:14 to play. Malcolm Brogdon scored his only hoop of the game on a putback off his own miss to put the lead at 59-53 with under three to go. Booker’s second deep ball of the game cut the lead to just three with 58 seconds left. The Tigers had the ball with under 25 seconds to go still down three, but Andre Young’s three-pointer was off and Scott rebounded it. He made both free throws to provide the five-point gap. Smith made a three to cut it to 63-61, but again Scott stepped to the line and calmly made both to provide the final count.

The Tigers return to action Saturday, also in the state of Virginia. Clemson will play at Virginia Tech at 4:00 PM in a game televised by the ACC’s Regional Sports Network.