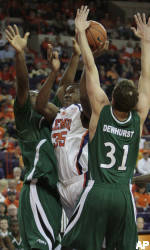 Right after the Tar Heels’ 90-88 overtime victory at Littlejohn Coliseum on Sunday night, the Clemson coaches told the players that their next opponent was ready to beat them “because we were mentally soft after the North Carolina game,” Booker said. “That’s what they did.”

Leemire Goldwire had his first career double-double with 21 points and 10 rebounds to lead the 49ers to their first victory over a ranked opponent in nearly three years.

“I don’t think we could’ve faced them at a better time,” Charlotte coach Bobby Lutz said. “But give us credit. We had to do the work.”

After Charles Dewhurst hit the go-ahead foul shot, Goldwire hit his third 3-pointer off a stepback move with freshman Demontez Stitt defending with 3:43 left. That seemed to deflate the Tigers.

“It’s one of my moves I use,” said Goldwire, a senior. “I knew as long as I held the follow through, it was going in.”

Maybe it was coming so close against the Tar Heels. Or maybe it was the nonconference opponent in Charlotte, but the Tigers did not have the same flash they showed a few days earlier.

Clemson star James Mays played with a heavily taped left wrist, which he fractured in pregame drills Sunday night. He was 3-of-8 from the field and had six points, half his average.

Also off was leading scorer K.C. Rivers, who finished 3-of-10 for six points, well below his 16-point a game average.

The exception was Booker, the sophomore forward who led Clemson with a career-high 32 points and grabbed 11 rebounds.

The 49ers appeared to have the game in hand when Dewhurst’s driving basket putting them ahead 49-37 with 16:22 to go.

Clemson scratched back and tied things at 69 on Rivers’ soft jumper with 4:23 left.

The rally seemed to tire out the Tigers, though, who took quick outside shots instead of going inside where Booker was dominant.

“We took ourselves out of it,” Purnell said.

Charlotte heads into Atlantic 10 play with a 2-2 mark against the Atlantic Coast Conference. The 49ers beat Wake Forest and lost to Georgia Tech and Maryland.

The Tigers had hoped to build off the defeat to North Carolina but they could not get going in the first half, routinely getting beat to the basket by Charlotte.

“They outhustled us, outscrapped us, outplayed us and beat us,” Purnell said.

Charlotte led 28-19 after An’Juan Wilderness was left all alone near the basket, causing Purnell to call a timeout.