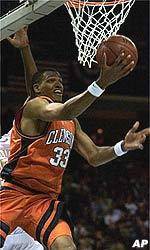 CHARLOTTE, N.C. (AP) – Delvon Arrington scored a career high 24 points as Florida State salvaged what has been a disappointing stretch run with a 91-84 overtime win against Clemson in the first round of the ACC tournament Thursday night.

The Seminoles (12-16) upset then-No. 1 Duke on Jan. 6, but had done little since in the Atlantic Coast Conference, going 3-11 the last two months before holding off the Tigers and advancing to play top-seeded Maryland in one of four quarterfinal games Friday.

Eighth-seeded Florida State fell behind by nine with 6:48 left in regulation, but went on a 14-2 run to take the lead late. The Seminoles then watched Tomas Nagys tip in a missed shot by Jamar McKnight with 0.6 seconds left in regulation to send the game into an extra five-minute period tied at 67.

However, the Seminoles wasted little time turning the momentum around. Monte Cummings sank a free throw and Michael Joiner hit a 3-pointer in the first 1:02 of the overtime and the Seminoles never trailed.

Nagys, who had a season-high 18 points and matched his career-best with nine rebounds off the bench, missed two free throws to start Clemson’s slide in OT, and the ninth-seeded Tigers (13-17) missed their first six shots from the field to fall behind 79-69.

Florida State, which struggled most of the night at the foul line, made 14-of-18 over the final 1:36 to nail down the win after losing nine of 10 coming in.

Edward Scott led the Tigers, which shot just 37 percent, with 23 points, but the point guard was 9-for-24 from the field.

Nagys was forced to play more minutes because of foul trouble against Clemson inside men Chris Hobbs and Ray Henderson – and the junior responded. He was 5-for-6 from the field and 7-of-10 from the foul line to add punch to an offense that struggled most of the night.

Clemson led 55-52 before Scott hit a 3-pointer and two 18-footers in a two-minute span to put the Tigers up by nine.

But the Seminoles came charging back as Cummings, who had missed 11 of his first 15 shots, hit a banker with 1:34 left to give Florida State the lead and Arrington added a 10-footer a minute later to set up a hectic final seconds of regulation.