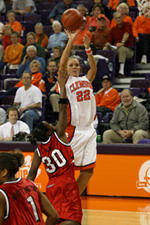 Charlottesville, VA – Virginia began the second half on a 17-4 run and downed Clemson 68-49 in women’s basketball action from University Hall on Sunday. The Cavaliers broke a 28-28 tie at halftime and held the Lady Tigers to just 21 second-half points. The win improved Virginia to 13-4, 3-1 in the ACC. The loss dropped Clemson to 7-8 overall, 1-2 in the ACC.

The Cavaliers scored 42 points in the paint, compared to just 14 for Clemson. The Lady Tigers were unable to take advantage of 2-15 three-point shooting and 6-17 free throw shooting by Virginia. A major reason was Virginia’s +15 rebounding edge (45-30).

Tasha Phillips led the Clemson team with 15 points on 6-16 shooting. Reggie Maddox was the only other double-figure scorer for the Lady Tigers with 10. Clemson shot 21.2 percent in the second half and committed 19 turnovers for the contest.

For the first time all season, the Lady Tigers found themselves in a tied ballgame at halftime, as the two teams were knotted at 28-28. Virginia was up 14-6 nearly 10 minutes into the first half, but Clemson answered with a 13-4 run to go up 19-18. Maxienne White was the catalyst, scoring three inside baskets for six points. Fellow freshman Adrianne Bradshaw connected on two shots in the paint for four points. Phillips also shot the ball well in the half, going 3-4 for seven points.

Clemson committed 12 turnovers in the half, but did force the same number of turnovers by the Virginia offense. The turnovers overshadowed Clemson’s 48 percent shooting in the half. The Lady Tigers also had four blocks, negating some inside shots for Virginia.

In the second half, the Cavaliers came out strong with a 17-4 run to start. Jocelyn Logan-Friend ignited the run with four quick points. She finished with a Virginia-high 14 points. LaTonya Blue added 10 for Virginia. The Cavaliers shot 63 percent in the second half and 50 percent for the game.

The Lady Tigers return home to play host to the Virginia Tech Hokies on Thursday, January 20. Tip-off is set for 7:00 PM from Littlejohn Coliseum.