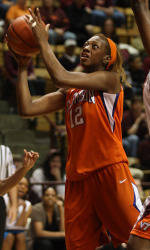 Clemson Falls at No. 7/7 Miami on Sunday

CORAL GABLES, FL – Clemson held No. 7/7 Miami to ten points below their season average and .333 shooting, but could not win a second game in 40 hours, as the Hurricanes (20-3, 9-1 ACC) downed the Lady Tigers (6-15, 2-8 ACC), 68-47, in Coral Gables, FL on Sunday. Lady Tiger freshman Nikki Dixon netted a team-high 16 points and also pulled down six rebounds in the loss, while senior Lindsey Mason had double-figure rebounds for a second straight game with ten. Playing just two days after a 55-51 win in overtime in Blacksburg, VA, Clemson’s fatigue showed early in the televised contest at the BankUnited Center. A key 19-3 Miami run in the first half gave the Hurricanes the cushion they needed as the margin stayed between 16 and 22 points the rest of the game. Following that run, which put Miami ahead, 26-8, the teams were relatively even, with Miami outscoring the Tigers, 42-39 the rest of the way. Preseason ACC Player of the Year Shenise Johnson had 19 points and 15 rebounds to lead all players, while Riquna Williams had 15 points before leaving due to injury after an early second-half collision. Clemson established a post presence early, consistently drawing fouls from the aggressive Hurricanes, but could not capitalize on their opportunities, shooting 7-20 inside the arc. Miami’s defense kept Clemson guessing much of the day with the aggressive trapping and ball pressure, which made post entry difficult.The Hurricanes forced 21 Clemson turnovers, converting for 18 points. Clemson was able to turn the Canes over 19 times, but turned them into just nine points. The Lady Tigers found some measure of consistency playing through Mason, who had six points, five offensive boards, and three assists in 30 minutes.Miami won the rebounding battle, 51-38, and limited Clemson’s second-chance points to just nine for the game. Shaniqua Pauldo scored her 900th career point in the ball game with a first half free throw, and she finished with six points and three rebounds. Quinyotta Pettaway had nine points and a pair of blocks, while Kelly Gramlich had eight points in 28 minutes.  Clemson forced 13 first-half turnovers from the Canes, and withstood a 19-3 run during the frame, which left Miami ahead 26-8 with 6:25 to play. But the Lady Tigers clamped down defensively, holding the Hurricanes without a field goal until a Suriya McGuire layup with six seconds to play. Clemson mustered an 8-0 run to cut the deficit to nine at 27-18 with a minute to play, but McGuire’s hoop put the Hurricanes ahead, 31-18 at the break. In the second, half fatigue set in, as Miami corralled 12 offensive rebounds on the way to 15 second-chance points. Every time it appeared they’d pull away, Clemson had an answer. The Lady Tigers cut the lead to 15 with 9:57 to play  but could get no closer as the Hurricanes stretched the lead back to 22, and the teams traded points on possessions. Clemson will play a second straight top-ten team as No. 9/10 Maryland comes to Clemson  on Thursday at 7:00 pm. The game is designated as Clemson’s Play4Kay game, in which fans are encouraged to wear pink in order to help raise awareness for breast cancer research.