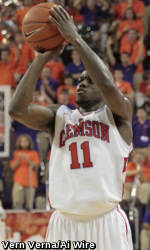 HONOLULU – Hawaii shot 60 percent after the halftime break en route to a 75-68 win in the fifth-place game at the Hawaiian Airlines Diamond Head Classic over Clemson on Sunday. The win improved the Rainbow Warriors to 7-5, and dropped the Tigers to 7-6 overall.

Three players reached double figures for the Tigers, led by Andre Young with 14 points. Young made 5-of-13 shots and 2-of-4 from three. Tanner Smith added 12 points and five assists, while Devin Booker contributed 13 points and seven rebounds. Hawaii guard Zane Johnson went off for a career-best 27 points. He made 6-of-12 from three-point range to highlight the Warriors’ offensive efforts.

Clemson trailed 7-2 early in the game before Booker hit a 15-footer, which was followed moments later by a Catalin Baciu knotted the game at nine apiece with a three-point play underneath the basket. The game was tied again at 14 after another Booker jam from Smith, but the Rainbow Warriors responded with five quick points to force a Brad Brownell timeout.

As was the case throughout much of the opening half, Clemson tied the game with another quick flurry of points. Sapp tied the game at 19 after swishing a three in the corner. The Tigers actually put together a 10-0 run that included a floater in the lane and a stepback trifecta from Young. Hawaii pulled to within one at 27-26, but Booker knocked down his third triple of the season to put the Tigers ahead by four.

Hawaii had a chance to tie the game going into the break, but K.J. McDaniels had a perfect block of a last-second three-point attempt by the Warriors’ Zane Johnson.

The Warriors came out with nine straight points inside to take a 40-34 lead just over three minutes into the second half. Johnson hit a catch-and-shoot three from the wing as Hawaii made four of its first five shots coming out of the break. Booker broke the scoring for Clemson with a putback inside to make it a four-point deficit.

The deficit was still four at 47-43 at the second media timeout after Rod Hall hit a pair of jumpers to keep the Tigers within striking distance. Johnson’s fifth long ball made it 52-45, the biggest lead for either team in the game, with 8:37 remaining. Johnson pushed the lead to 10 with another three before Sapp answered with his third trifecta of the game with just under seven minutes left.

Hawaii pushed the lead to double digits at 59-48 after a fallaway jumper by Hauns Brereton. The Tigers trimmed an 11-point lead to five after two plays from McDaniels. First, he tipped in a Booker miss and then had another putback after an offensive board.

Clemson played the game without 6-foot-9 junior Milton Jennings, who was serving a one-game suspension.

The Tigers will break for Christmas, before gathering for practice again in a few days. Clemson returns to game action on Sunday, Jan. 1 by playing host to East Tennessee State at 4:00 PM at Littlejohn Coliseum.