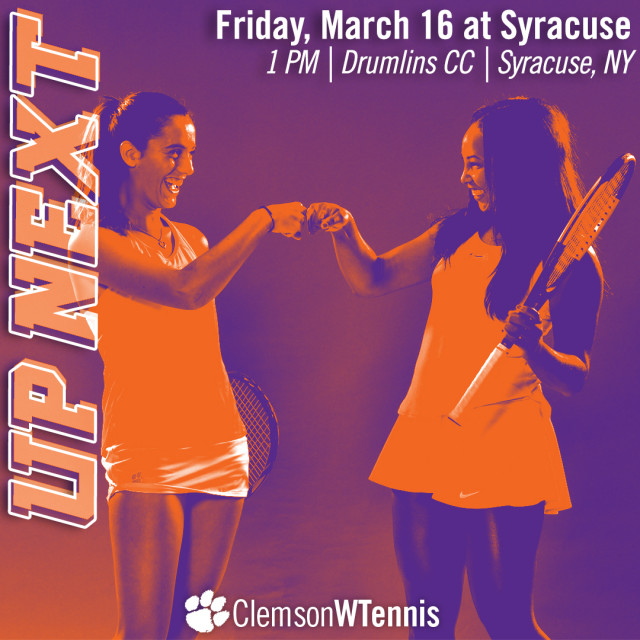 Clemson Faces Syracuse & Boston College on the Road this Weekend

– The Tigers (7-6, 1-3 ACC) are coming off of a 7-0 win over Charlotte and a 5-2 win over UNC Greensboro in a doubleheader held in Greenville, S.C. on Saturday, March 10. Junior Ally Miller-Krasilnikov and sophomores Sydney Riley and Tate Schroeder each went 2-0 in singles play on the day.

– Schroeder has clinched the overall team win in the Tigers’ last three wins.

– Clemson has won the doubles point in eight of its 13 matches on the season. The Tigers have a 6-2 record in those eight matches.

– Junior Marie-Alexandre Leduc is ranked 20th in the nation in singles. She has a 5-3 record and has played all of her dual matches at the No. 1 singles position.

– Leduc and fellow junior Fernanda Navarro are ranked 60th nationally in doubles, entering the ITA rankings for the first time on March 6. The pair is 6-2 on the season, all at No. 1 doubles, and are currently on a four-match winning streak.

– Navarro was named ACC Player of the Week on Feb. 20, for her performances against Wake Forest and UT Chattanooga the week of Feb. 12-18.