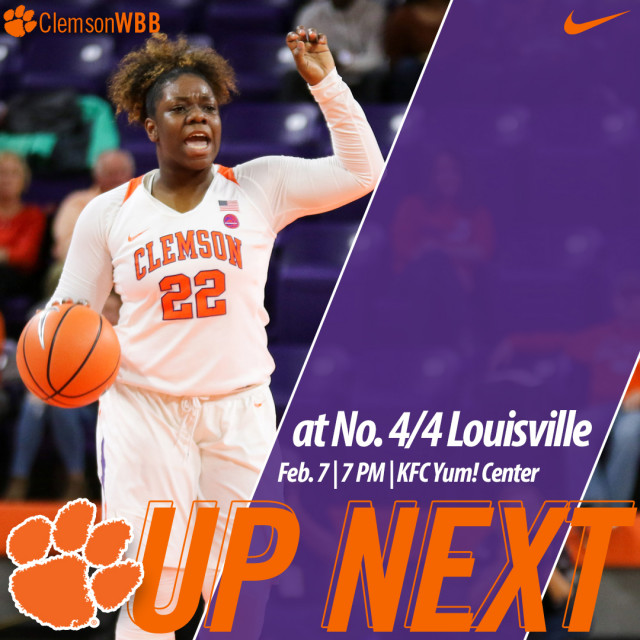 Clemson Faces No. 4/4 Louisville on the Road Wednesday

– Clemson leads the ACC in three-point field goal percentage defense, holding its opponents to just 28.5% from behind the arc on the season. The Tigers are fifth in the conference in scoring defense (59.1), and are only 3.1 points behind first-place NC State (56.0) in that category.

– The Tigers are also in the top-half of the conference in three other defensive categories, as they are sixth in turnovers forced per game (17.2) and steals per game (8.5) and seventh in total steals (204).

– Thornton leads the Tigers in scoring overall and in ACC play. The 2017 ACC All-Freshman Team selection is averaging 10.5 points per game on the season, and 12.7 points per game through the Tigers’ first 11 ACC games.

– Edwards’ 64 steals and 2.7 steals per game rank third among all ACC players. On Nov. 13, 2017, Edwards posted nine steals in the Tigers’ 56-48 win over South Carolina State, tying the Clemson record for steals in a single game. Four different players have recorded nine steals in a game previously for the Tigers, however, it had not been done in 30 years, when Ramona O’Neil picked up nine steals against Virginia on Feb. 14, 1987.

– Louisville leads the series against the Tigers, with a 4-3 record all-time.

– Aliyah Collier recorded a double-double (10 points, 11 rebounds) and Kobi Thornton was close behind (10 points, 9 rebounds) in the home game against Louisville, while Nelly Perryand Danielle Edwards scored 11 and 10 points, respectively, in the tournament game against the Cards.