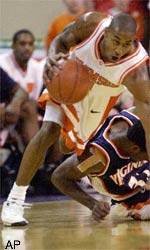 Clemson vs. #1 A number-one ranked North Carolina team will come to Littlejohn Coliseum on Sunday. Clemson has a 1-22 lifetime record against the number-one team in the nation, including a 0-10 mark against the Tar Heels. Clemson’s only win in basketball over the number-one team took place on Jan. 9, 1980 when the Tigers defeated a #1 ranked Duke team 87-82 in overtime in front of the largest crowd in the history of Littlejohn Coliseum, 13,864.

Clemson’s last game against the number-one team and the only time a Larry Shyatt coached team has faced #1 was on Feb. 20, 1999 when Duke defeated Clemson in Cameron Indoor Stadium, 92-65.

One of the close losses to #1 took place in the 1982-83 season. A Clemson team that would end the year last in the ACC with a 2-12 record, lost to a North Carolina #1 ranked team by just 84-81. That North Carolina team featured Michael Jordan (24 points), Sam Perkins (30 points) and current UNC coach Matt Doherty.

Clemson’s best chance on paper of beating a number-one North Carolina team took place on Jan. 29, 1987. The Tigers had a 17-1 record entering the game and were ranked 10th in the nation. Clemson featured ACC Player of the Year Horace Grant and three-point marksmen Michael Tait and Michael Brown. Clemson shot 44.7 percent on three-point shots that year, still the ACC team record for a season. The Tigers had a 50-38 lead at halftime, but the Tar Heels scored 70 points in the second half, including 30 by Kenny Smith, in a 108-99 Tar Heel victory. Smith finished with 41.

Doherty Returns to Littlejohn North Carolina coach Matt Doherty had a perfect 4-0 record as a player in Littlejohn Coliseum between 1980-84. In fact, Doherty never lost any game to Clemson in his career (10-0). Clemson gave the Tar Heels a good game each time at Littlejohn, losing by an average of 8.5 points a game. For the four games at Littlejohn, Doherty shot 10-25 from the field, 7-8 from the line, had 17 rebounds and 27 points (6.8 per game). He had an outstanding 12/2 assist/turnover ratio on the four games combined and averaged 35.5 minutes per game. He had one double figure scoring game, 11 points and six assists as a senior in a 82-71 North Carolina win.

Doherty had 28 points against Clemson in the 1983 ACC Tournament as a junior. He connected on 5-6 three-point goals in the game. Michael Jordan matched his point total in North Carolina’s victory at The Omni in Atlanta.

McIntyre scored 25 points, including four three-point goals. One of the threes was a “catch and shoot” 22 footer with the shot clock near zero. That play was cited as the CNN Play of the Day. McIntyre also had six assists and three steals in leading the Tigers to the victory. Tony Christie added a season-high 15 points and became Clemson’s career leader in three-point goals by a forward. Harold Jamison was a third double figure scorer for Clemson with 11 points and he added seven rebounds and three steals. Tom Wideman had 10 rebounds, seven points and four assists.

Clemson won the rebounding battle, 39-28, including 18-7 on the offensive boards. North Carolina came into the game ranked number-one in the nation in rebound margin. The Tigers also had a +5 in terms of turnover margin, forcing 17 defensively and committing just 12 offensively.

The Tigers scored the first bucket of the game on a layup by Tom Wideman and never trailed. North Carolina tied the count at two, and that was the only tie of the game. It was the first time in history that Clemson had never even trailed in a game against the Tar Heels. Clemson had a 10-point lead in the first half at 31-21 and led 39-31 at intermission. Andrius Jurkunas hit a three-point goal with four seconds left to send Clemson into the locker room with momentum. North Carolina cut the lead to four in the second half at 45-41, but the Tigers went on a 10-0 run to take a 55-41 advantage. It reached 15 with 12:38 left on a three-point goal by McIntyre. North Carolina got to within seven points on a three-point goal with 2:25 left by Ronald Curry, but that was North Carolina’s only points in the last three minutes. Clemson went on an 8-0 to close the game.

First Meeting this Year… North Carolina 92, Clemson 65 Jan. 17, 2001 North Carolina used a balanced attack, a 24/12 assist/turnover ratio and 12 made three-point goals in defeating Clemson 92-65 on Jan. 17. It was the 47th straight victory for North Carolina over the Tigers in Chapel Hill.

Clemson was led by Will Solomon, who scored 17 points, but 15 of those came in the first 12 minutes of the game. North Carolina made a point of stopping him after his 6-9 shooting start. Dwon Clifton added nine points, as did Jamar McKnight, who played just 11 minutes. Clemson held its own in terms of rebounding, tying the larger Tar Heels 41-41 in that area. A big difference came in the area of turnovers, where North Carolina committed only 12, while the Tigers had 20. North Carolina had nine blocked shots, including six by senior center Brendan Haywood. Joseph Forte led North Carolina in scoring with 13, while Kris Lang added 13. Jason Capel had 11 points, nine rebounds and five assists.

Clemson was competitive for the first 15 minutes, trailing by just 34-26. But, North Carolina extended the lead to 44-31 by intermission. The Tigers made just 3 of their first 16 shots and committed seven turnovers over the first seven minutes of the second half. North Carolina used a 20-4 run during that time to take a 29-point lead.

This Clemson team does not mind going to the Tar Heel state because six of Clemson’s 16 roster players are from North Carolina. The list includes five scholarship players and one walk-on. Starters Dwon Clifton (Louisburg), Chris Hobbs (Chapel Hill) and Ray Henderson (Charlotte) are from North Carolina. Chucky Gilmore, a starter last year, who is out for the year with a torn ACL injury, is from Fayetteville. Walker Holt is a guard from Greensboro, while walk-on guard Wes Long is from Charlotte.

Clemson started an all North Carolina frontline in the win over N.C. State in January and continues to start that same trio of Tar Heels. This is the largest contingent of North Carolina residents on the Clemson roster in history.

Top Two ACC Scorers on Display The top two scorers in the ACC will be battling on Sunday at Littlejohn Coliseum. Clemson guard Will Solomon is first with a 21.3 average, while North Carolina’s Joseph Forte is second at 21.2. In fact, just two total points separate the two players (489 to 487). Solomon has held the ACC scoring lead every day since Dec. 1, 1999. He moved into the ACC scoring lead with a 37-point performance at Penn State and has led ever since. He finished last year with a 20.9 figure to lead the league and has been in the lead every day this year.