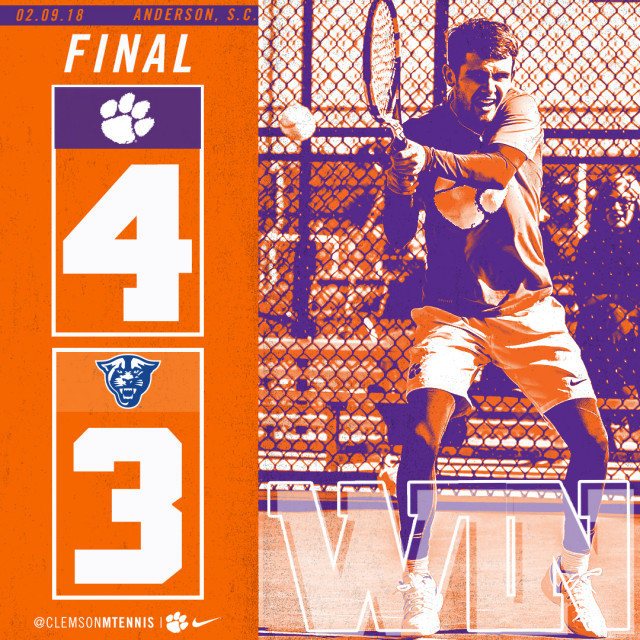 ANDERSON, S.C. – The Clemson men’s tennis team improved to 5-1 on Friday night with a 4-3 victory over Georgia State in the home opener at the AU Tennis Center. With the loss, the Panthers slip to 4-5 on season.

Georgia State took the hard-fought doubles point against the Tigers with the point being decided by a tiebreak on court one. Sam Edwards and Yizhou Liu finished second, with a victory at No. 2, 6-3. The Panters would then take No. 1, 7-6 (5) and No. 3 (6-0).

In singles play against the Panthers senior Alex Favrot and sophomores Carlos Kelaidis and Marshall Dagostine gave the Tigers a 3-1 advantage winning their matches in two sets. Favrot defeated Andrukhou of Georgia State, (6-4, 6-2) to level the score at one. Kelaidis gave the Tigers the first lead of the day with a win at No. 5 (6-4, 6-4). Dagostine took both sets at No. 6 with scores of 7-6 (4) to put Clemson up 3-1.

With the match tied three-all, Simon Baudry came from behind and battled his way back to defeat Coulaud in three sets, (4-6, 7-5, 7-5) to clinch the match point.

Up Next
With Sunday’s doubleheader being canceled due to the threat of inclement weather, the Tigers will return to action Friday, Feb. 16 as they travel to Atlanta, Ga. to face Georgia Tech in the ACC opener. The match is set for a 5 p.m. start.

Head Coach John Boetsch Quotes “I’m proud of our team for battling through against a strong Georgia State team. We had some adversity this week with several guys sick, but they showed their toughness tonight. Again today, it came down to the last match—but these tight matches are helping us grow as a team.”