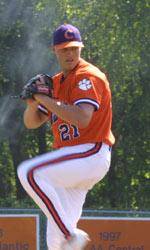 Henrie (12-4) threw 120 pitches over eight innings, allowing only two unearned runs and seven hits while striking out seven and walking two. The outing was his second longest of the season behind an 8.1 inning effort in a win at North Carolina. Starter Davey Penny (8-4) got the loss for East Carolina.

East Carolina jumped out to a 1-0 lead in the first inning behind Clayton McCullough’s RBI-single through the left side. The Tigers put runners in scoring position in the first two innings without getting a run before finally breaking through in the fourth. Clemson loaded the bases with one out when Steve Pyzik hit a ground ball to shortstop. Luke Perry flipped the ball to second baseman Jedd Sorenson, but Sorenson’s attempt to turn the double play went awry when his throw sailed over first base and into the dugout. Two runs scored on the play to give the Tigers a 2-1 lead.

The Pirates tied the score in the sixth inning. With the bases loaded and one out, Daniel Vick grounded out to first base, allowing Sorenson to score. With runners on second and third, Henrie induced a flyout to get out of the inning without further damage.

Clemson regained the lead in the bottom of the frame thanks to Jarrod Schmidt. After Zane Green doubled, Schmidt hit a deep fly to center that ECU’s Warren Gaspar had in his sights. Gaspar leaped and crashed into the fence as the ball hit his glove. The ball then went over the fence for a home run, Schmidt’s 10th of the year, and put the Tigers up 4-2.

Meanwhile, Henrie held down the Pirate offense. He put two runners on in the eighth inning, but got out of the inning and was relieved by Jeff Hahn in the ninth. Hahn retired the first two batters in the ninth before giving up two straight hits. Hahn then struck out pinch hitter Brian Cavanaugh to earn his third save of the year and put Clemson in the regional championship game.

Green, Schmidt and Frank had two hits apiece to lead the Clemson offense. Khalil Greene doubled in the first inning to extend his hitting streak to 29 games. The hit was his eighth straight, the second time this year Greeene has notched eight hits in a row, and the double was the 90th of his career, moving him into third in NCAA history.