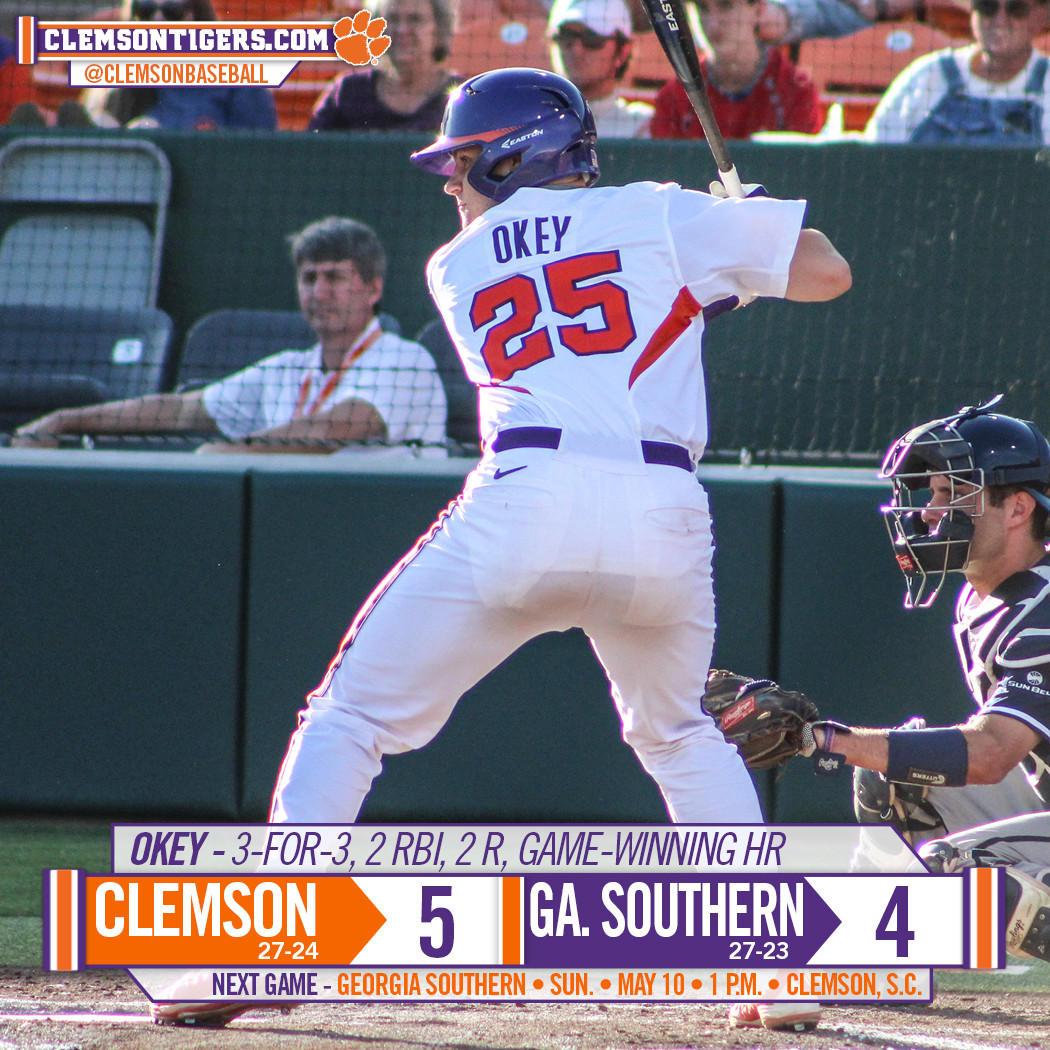 CLEMSON, S.C. – Chris Okey’s solo homer in the eighth inning lifted Clemson to a 5-4 win over Georgia Southern at Doug Kingsmore Stadium on Saturday night. The Tigers, who took a 2-0 lead in the series, improved to 27-24, while the Eagles fell to 27-23. The win was Jack Leggett’s 950th as Clemson’s head coach.

The Tigers jumped out to a 2-0 lead with two runs in the first inning, then the Eagles scored two unearned runs in the second inning to tie the score. Clemson regained the lead in the fourth inning on Tyler Slaton’s two-out, run-scoring single, but Ryan Cleveland lined a solo homer in the top of the sixth inning and the Eagles scored another unearned run to take the lead. An Eagle error with two outs in the bottom of the sixth inning allowed the Tigers to tie the score before Okey’s go-ahead long ball, his 10th of the season, to lead off the eighth inning. He became the first Tiger since 2012 (Richie Shaffer) to hit double-digit home runs in a season.

Zack Erwin (5-4) earned the win, as he allowed five hits, four runs (one earned) and one walk with 11 strikeouts, tying his team-season-high. Taylor Vetzel pitched a scoreless ninth inning to record his third save of the season. Reliever Ryan Frederick (2-1) suffered the loss.

“We played well,” said head coach Jack Leggett. “In terms of pitching, we were really good tonight. Zack Erwin was really good and (Taylor) Vetzel came in the ninth and pitched really well.

“We didn’t play very good defense tonight. Two of the three defensive mistakes we made cost us runs and we were lucky to be able to overcome it against a good team. They put some pressure on us and they run the bases pretty well. They showed us some good pitching, but we were able to get some timely hits. We didn’t have the big inning, but we kept ourselves where we needed to be.”

The series concludes Sunday at 1 p.m. Sunday is Senior Day, as Clemson honors its seniors in a pregame ceremony. Fans can purchase two reserved adult and two reserved youth tickets for only $20. Youth 12 and under receive free admission by wearing a camp or little league shirt. It is also Sunday Funday, with family-friendly activities during the game and throughout Doug Kingsmore Stadium. For Mother’s Day, moms receive free admission with a reserved-seat purchase as well.