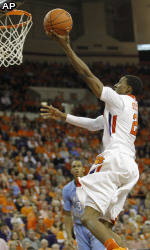 CLEMSON, S.C. (AP) – Freshman Harrison Barnes scored 20 points, John Henson had 14 points and 12 rebounds and No. 20 North Carolina bounced back from its loss at Duke to beat Clemson 64-62 on Saturday.

Barnes dunked with 3:01 left to put the Tar Heels (18-6, 8-2 Atlantic Coast Conference) ahead to stay, 53-51. Freshman Kendall Marshall followed with a steal of Clemson senior Demontez Stitt and made an easy layup to extend the lead.

North Carolina held a 14-point halftime lead at No. 5 Duke this past Wednesday, but lost 79-73. The Tar Heels have won 12 of the last 13 against Clemson.

Stitt led the Tigers with 17 points, 13 in the second half.

In the end, it was North Carolina’s freshmen outplaying the more experienced Tigers.

Along with Barnes’ play, Marshall, the Tar Heels’ new point guard, ended with 18 points, including going 10 of 11 from the free throw line.

Jerai Grant, a 6-foot-8 senior, was held scoreless as he missed all three shots. Grant, the Tigers’ leading rebounder, came away with only one board.

Henson, the 6-10 sophomore, had a lot to do with Grant’s troubles, adding four blocks in his third straight double-double and eighth this season.

The Tar Heels threatened to blow this one out with a 15-4 start and were still ahead 28-22 at halftime. However, Clemson got back into it with an 8-0 run to start the second half and lead 30-28. Neither team was up by more than four points until the final minute as the Tar Heels built the 61-53 lead from the foul line.

This past Wednesday, North Carolina looked like it would take charge of the ACC race when it was up big at Cameron Indoor Stadium. But the Tar Heels were overrun by Duke in the second half of a 79-73 loss.

They hoped that effort wouldn’t continue here at Littlejohn Coliseum. After all, the Tar Heels’ last visit here wasn’t a happy one. It started with the Tigers grabbing a 35-12 lead and ended with Clemson fans rushing the court after the 83-64 victory.

North Carolina made sure that didn’t happen this time, Barnes getting the Heels off to the early lead. Barnes scored seven points, Henson added two baskets and Marshall drove in for an uncontested layup.

Clemson opened the game 2 of 15 from the field and went nearly 7 minutes with a bucket.

After a timeout and some words from first-year coach Brad Brownell, the Tigers regrouped with a 14-4 run to tighten things up.

Still, North Carolina’s defense kicked in near the end to keep in front. Clemson, tied with the Tar Heels for best shooting percentage in ACC games coming in, finished just 9 of 33 (27.3 percent) from the field and made just two of 15 3-pointers.

Stitt and Grant, Clemson’s top two scorers who average better than 26 points a game, were a combined 2 of 9 for four points.