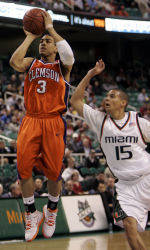 GREENSBORO, N.C. (AP) – Denis Clemente hit a go-ahead 3-pointer with 50.9 seconds left to help Miami rally from a 12-point deficit and beat Clemson 66-63 in the first round of the Atlantic Coast Conference tournament Thursday.

Guillermo Diaz scored a game-high 22 points and assisted on Clemente’s 3 for the eighth-seeded Hurricanes (16-14), who trailed most of the way before making a late spurt to earn their first tourney win. Miami advanced to face top-seeded No. 3 Duke in Friday’s quarterfinals.

Vernon Hamilton scored 17 points for the Tigers (18-12), who dominated the boards and hit 10 3-pointers but shot just 29 percent for the game to fall to 14-53 all-time in the tournament. Clemson earned a 48-38 rebounding advantage, including 24 offensive boards, but shot just 9-for-35 after the break.

The Hurricanes appeared headed for a second-straight first-round exit from the tournament, trailing 48-36 with about 12 minutes to play. Diaz scored nine points to help Miami outscore Clemson 30-15 the rest of the way.

Diaz first made a 3 to cut the deficit to 60-59 with 2:05 left, then drove the baseline to find Clemente alone in the right corner for a 3 and a 62-60 lead. It was only Clemente’s second 3 since hitting two against Boston College on Jan. 21, a span in which he missed 14 straight before hitting one in the regular-season finale against Florida State.

Clemson still had a chance to tie it when Clemente and Anthony King each went 1-for-2 at the line in the final 21 seconds, but the Tigers came up empty on two possessions.

On the last, King blocked Shawan Robinson’s 3-point attempt, but Robinson corralled the ball and found Hamilton on the left side. Hamilton pump-faked to let a defender fly by, then hoisted a 3 that clanged off the rim at the horn.

Clemente finished with 10 points for Miami.

The Tigers came into Greensboro on an unusually strong note, winning three-straight league games heading into the tournament for the first time in 42 years. Their 18 regular-season wins were the most for the program since 1997, and their seven league wins were most since ’98.

Clemson punctuated that stretch by scoring 61 points in the second half – the Tigers’ highest-scoring ACC half in 13 years – in a 95-82 home win against Georgia Tech.

They picked up where they left off, pushing to a 34-26 halftime lead on a dunk by Akin Akingbala just before the horn. They pushed that lead to 12 on a 3 from Julius Powell with 11:55 left, but shot just 4-for-22 the rest of the way.