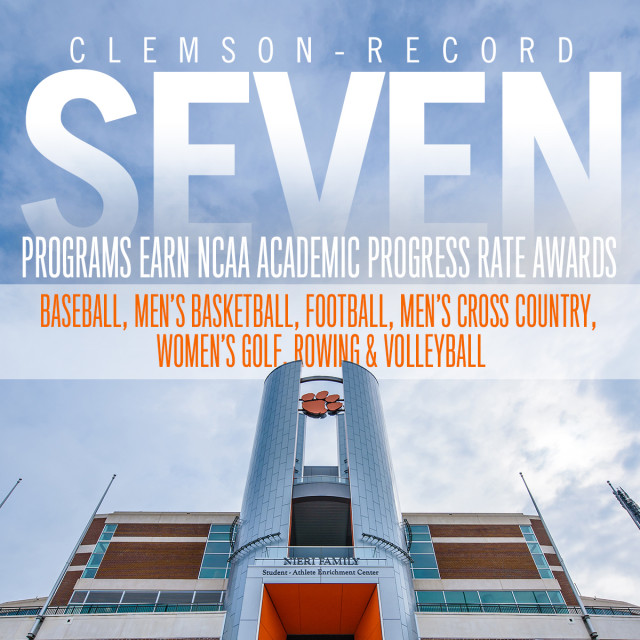 For the second straight year, Clemson set a new school record as seven programs were honored for outstanding academic achievement as part of the NCAA Academic Performance Public Recognition Awards. Baseball, men’s basketball, football, men’s cross country, women’s golf, rowing and volleyball each earned recognition as raking in the top 10 percent of their sport in the eligibility, graduation and retention metric.

“The culture of our programs contributes to the academic successes our student-athletes have in the classroom,” Director of Athletics Dan Radakovich said. “Our coaches, staff and student-athletes each work to prioritize classroom performance, and it shows up annually in the results put forth by the NCAA in Academic Performance Rate and Graduation Success Rate.”

Football earned the award for the seventh time in eight seasons, men’s basketball was listed for the third-straight year and baseball and volleyball posted their second-consecutive top 10 recognition. Women’s golf has earned the award each of its first four seasons of existence.

Each year, the NCAA honors selected NCAA Division I sports teams by publicly recognizing their latest multiyear NCAA Division I Academic Progress Rate.  This announcement is part of the overall Division I academic reform effort and is intended to highlight teams that demonstrate a commitment to academic progress and retention of student-athletes by achieving the top APRs within their respective sports.  Specifically, these teams posted multiyear APRs in the top 10 percent of all squads in each sport.

APR scores for all Division I teams will be released May 23. The APR measures eligibility, graduation and retention each semester or academic term and provides a clear picture of the academic performance for each team in every sport. All teams must meet an academic threshold of 930 to qualify for the postseason and can face penalties for continued low academic performance.