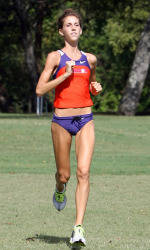 Ruck easily posted a personal best over the 5K course, turning in a time of 17:02.4 to finish ahead of hometown favorite and defending Atlantic-10 champion Amanda Goetschius. A sophomore out of Greer, SC, Ruck’s championship was the second individual crown for the Clemson women’s cross country team this season. Kelsey Armstrong previously won the Gamecock Invitational to start the season.

Armstrong continued to impress in her debut season with the program, finishing fifth in the individual race. She also recorded a personal-best time over the 5000m course, as she crossed the finish line in 17:32.5. Armstrong has been one of the team’s top two finishers in each of the first three meets of the season.

The men’s team had its top five scorers finish within 50 seconds of each other. Jonathan Sunde was the top finisher, as the native of Charlotte posted a 12th-place finish Friday. He had a time of 25:23.3 over the 8K course, Clemson’s first team competition at that distance this season. The No. 2 scorer for the Tigers was Chad Holt, who finished 16th with a time of 25:36.3.

Chris Slate continued his early-season consistency with a 19th-place showing. The Delaware native posted a time of 25:43.5 and has been among the team’s scorers in each of the first three meets this season. Tyler Morey had a solid outing, as the junior was 21st in the race with a time of 25:49.4. The fifth and final scorer of the meet was freshman Blake Kennedy. He crossed the finish line in 31st position with a time of 26:11.7. Kennedy has also placed in Clemson’s top five at every meet so far this season.

The Tigers will return to action on Friday, Oct. 16 in Boone, NC for the Blue Ridge Open. The teams are not slated to compete in the previously scheduled Furman Invitational next weekend.