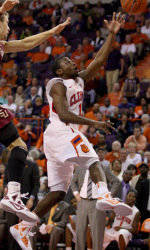 CHESTNUT HILL, MA – Clemson did not make a field goal in the final 5:53 of the game and lost at Boston College, 59-57, on Thursday at Silvio O. Conte Forum. The Tigers fell to 9-7 with the loss, 1-1 in the ACC. The Eagles improved to 6-10 overall, also 1-1 in league play. Clemson made just 3-of-8 from the free throw line inside the final five minutes.

Clemson had two players in double figures, guards T.J. Sapp and Andre Young. The senior Young led the Tigers with 12 points, while Sapp added 11 following a scoreless effort last time out versus Florida State. Dennis Clifford led the Eagles with 15 points, while Lonnie Jackson added 14. The Tigers shot just 38.5 percent, including a 5-for-19 effort from behind the three-point line. Clemson owned a +10 advantage on the boards, but suffered from 14 turnovers.

The Eagles jumped out to a 10-4 lead at the first media timeout, thanks to a pair of long-range goals in the opening minutes by Matt Humphrey and Jordan Daniels. Clemson went on a 9-2 run after freshman Sapp scored seven straight points, the last two coming off a steal and drive to the basket that resulted in a pair of free throws.

The two clubs exchanged baskets over the next several minutes, but Boston College took a 23-20 lead on a long jumper by Clifford. A steal by Tanner Smith and a pass ahead to Rod Hall pulled Clemson to within two at 25-23, and then Devin Booker tied the game with a left-handed hook a couple of feet from the basket. Matt Humphrey put the Eagles ahead by one, but Young chose the right moment to deliver his first three-pointer of the game as time expired to give the Tigers a 28-26 lead at intermission.

Clemson opened the second half with an 11-6 run that culminated with a four-point play from Sapp, the Tigers’ second of the season. BC answered with a layup inside from Anderson to cut the lead to 39-34 at the first timeout of the half. The Eagles trimmed the lead to two before Clemson scored on consecutive layups, first by Hall and then Young.

Boston College scored eight straight points, the last six of which came off back-to-back threes by Lonnie Jackson, to take a 45-43 lead with 11:38 remaining. He then converted a three-point play to cap an 11-0 run. Clemson then retook the lead after a 6-0 run that featured consecutive baskets by Booker, one of which was a thunderous follow slam.

Daniels tied the game again at 54 on a long three after Milton Jennings had scored four straight points for Clemson. Daniels’ shot broke a field goal drought for the Eagles, who had gone 5:40 without a basket. With three minutes left, Clifford broke the tie with a dunk inside, giving BC the 56-54 lead.

A travel by Jackson turned the ball over to Clemson with 1:23 left, and Smith was fouled on a three-point shot. He made the final two and tied the game at 56. Smith was guilty of a travel after Clifford gave BC a 58-56 lead with under a minute to play. Jennings had a chance to tie the game at the free throw line, but only made one of two with 10.5 seconds to go. Clemson fouled the inbounds with 8.7 seconds left, and Jackson made only one to put the lead at 59-57. Booker was fouled, but missed a pair and BC escaped with the victory.

The Tigers return home to play host to No. 6/8 Duke on Sunday at Littlejohn Coliseum. The Tigers and Blue Devils will tip off at 6:00 PM in an ESPNU Sunday Night Hoops contest.