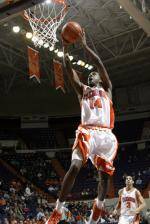 The Tigers (6-4) led 60-52 with 4:33 to go before scoring on their next seven possessions during the decisive run.

Sharrod Ford scored five of his 12 points during the run. He also had 11 rebounds. Chris Hobbs and Shawan Robinson scored 11 points apiece for Clemson.

Clemson shot 42 percent from the field to 36 percent for Radford and outrebounded the Highlanders 47-31, including 18 offensive boards.

Radford trailed by nine at the half, but a 3-pointer by Holcomb-Faye cut the Clemson lead to 46-43 with 15:17 remaining.

The Highlanders then went nearly 4˝ minutes without scoring, but the Tigers also struggled to extend the lead beyond eight until they went on the 14-0 run.

Radford scored on its final six possessions of the first half, but Clemson used four free throws from Robinson and a tip-in by Christie at the buzzer to lead 40-31 at the break.