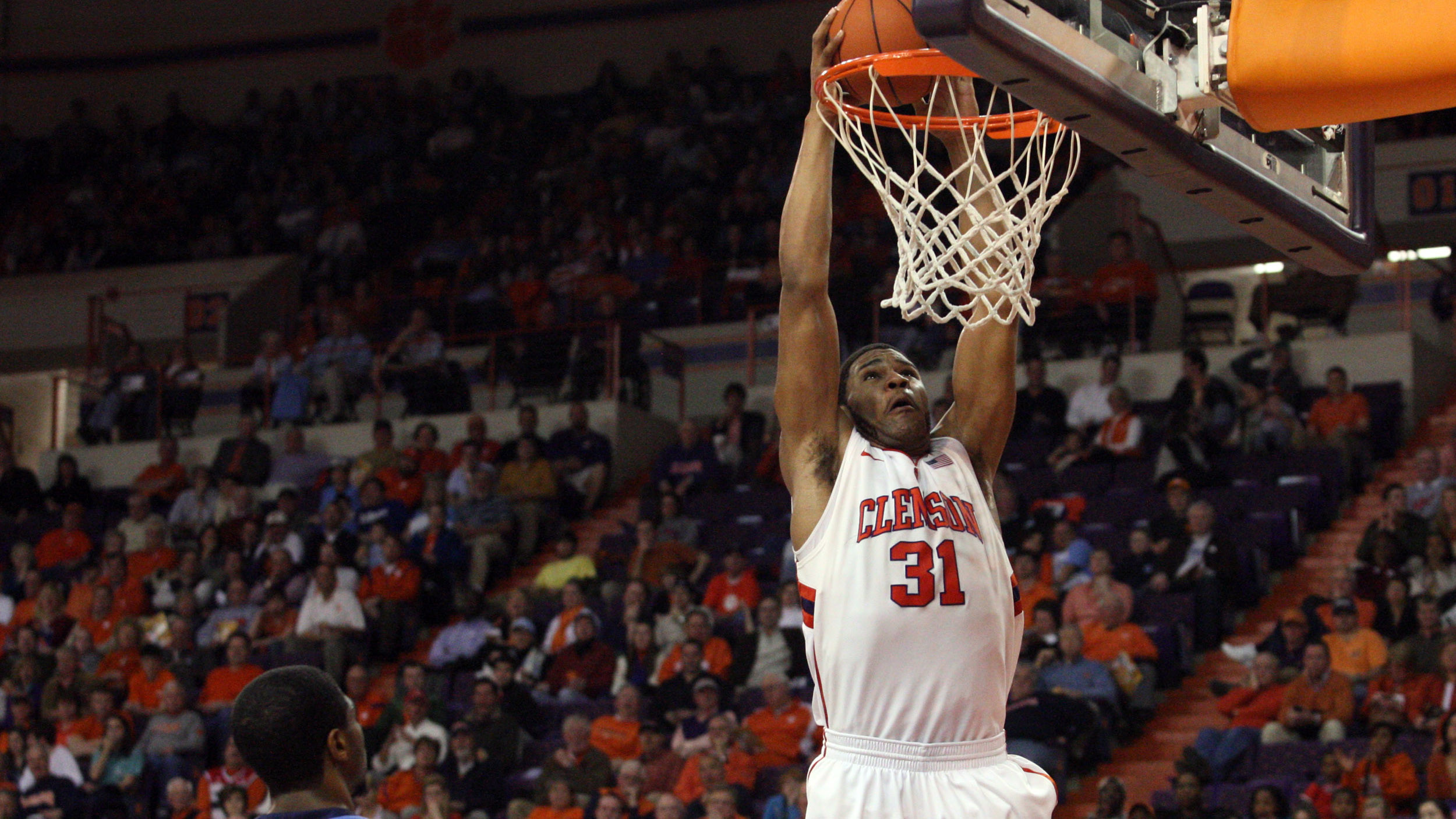 CLEMSON, SC – Devin Booker posted a game-high 25 points and his fifth double-double of the ACC regular season, but Clemson fell victim to a hot-shooting North Carolina team by a score of 68-59 on Thursday at Littlejohn Coliseum. Milton Jennings added a double-double for the Tigers, who fell to 13-14 overall and 5-10 in ACC play. The Tar Heels improved to 20-8 on the season, 10-5 in the league. Booker, who had just four points and two fouls at halftime, scored 21 of his 25 in the second half. It was the second-highest scoring total of his career, and most points by an individual Clemson player versus North Carolina since Demontez Stitt had 25 in the semifinals of the 2011 ACC Tournament. The 6-foot-8 senior had 11 rebounds to boot, surpassing Randy Mahaffey for 13th in Clemson history for career rebounds. Jennings posted 12 points, 10 rebounds and a season-high five assists in 35 minutes. He made 5-of-10 shots, including 2-of-6 from three. The Tigers won the rebound margin, 39-30, but shot just 39.7 percent compared to 47.3 for UNC. The Tigers also had 12 turnovers in the second half and 15 for the game. Clemson played without starting forward and second-leading scorer K.J. McDaniels, who sprained an ankle during Thursday’s shootaround. UNC got off to a hot start, pulling out to an 11-4 lead on a three by freshman Marcus Paige. The Tigers tightened up offensively and actually tied the game at 18 on a layup by Damarcus Harrison. From that point, the Tar Heels went on a 20-6 run to close the half. James Michael McAdoo scored six of his 11 points during that stretch. The Tigers went to Booker early and often in the second half, but could only narrow the deficit to 10 on a pair of occasions – including 50-40 at the 13:52 mark on a layup inside. After Carolina stretched its lead back to 17 on a P.J. Hairston trifecta, Clemson whittled it to single digits at 66-57 on two Booker free throws. The closest Clemson could get in the second half was within seven at 66-59 on an offensive putback by Booker, but by then only a minute remained in the contest. Five players reached double figures for North Carolina, led by Dexter Strickland’s 16 points. Reggie Bullock added 12 with a game-high six assists and no turnovers in 35 minutes of play. UNC committed just nine turnovers in the game and had a 2-to-1 assist-to-turnover ratio. The Tigers play their second of three games in a six-day span on Saturday. Clemson and Virginia Tech will meet at 8:00 PM in Blacksburg, VA.