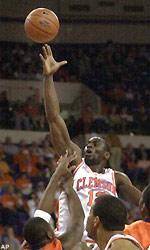 Todd Billet scored 21 points, including a decisive three-point goal with 16 seconds left to lead Virginia to a 58-55 victory over Clemson Saturday afternoon at Littlejohn Coliseum. The victory improved the Cavaliers to 14-10 overall, 4-9 in the ACC, while Clemson fell to 10-14 overall, 3-10 in the ACC.

Clemson was coming off a 60-55 victory over 13th ranked NC State the previous Wednesday night, the second top 15 win for the Tigers in Oliver Purnell’s first season as Clemson head coach. Clemson now travels to Maryland for a Tuesday evening game in College Park. The game featured eight ties and six lead changes.

Olu Babalola led the Tigers with 19 points, nine rebounds and three assists. It was the third time this year a Clemson player had led the Tigers in all three categories in the same game. Freshman Vernon Hamilton did it on two occasions earlier this year. Babalola also led the Tigers in steals with three. Fourteen of his 19 points came in the second half.

Shawan Robinson also scored in double figures for the Tigers with 10 points. Chey Christie added nine and Akin Akingbala recorded eight rebounds. Clemson won the battle of the boards 47-31, including a season high 24 offensive rebounds, but the Tigers still could not get the win as Clemson shot just 34 percent from the field, hitting just 20-59 shots.

Once again Clemson held the opposition under 40 percent shooting as Virginia made just 22-56 shots from the field, 39.3 percent. Clemson blocked eight shots on defense, including four by Akin Akingbala and three by Sharrod Ford.

Billet was outstanding as the senior leader hit 8-13 shots from the field, including 5-9 on three-point attempts. He also had five assists and just one turnover in 35 minutes. It was the second straight year he had an outstanding game in Littlejohn Coliseum. He had 25 points, including seven three-point goals, in a 78-77 Clemson victory last year.

Clemson went on an 11-3 run over the last seven minutes of the first half to take a 28-20 lead at intermission. Clemson was very balanced in the first half as eight different players had between two and five points and all nine players who participated had at least one rebound. Clemson won the rebound battle 29-12, including six apiece by Akingbala and Lamar Rice. Virginia was held to 8-27 shooting by the Tigers defense, which had held 13th NC State to 30 percent shooting the previous Wednesday.

But, Virginia went on a 14-2 run to open the second half and went from an eight-point deficit to a two-point lead. Starting guards J.R. Reynolds and Billet both made two three-point goals to key the rally.

But, Clemson finally got untracked behind Babalola, who scored eight straight and 12 of 13 at one stretch to bring Clemson to within 44-43 with seven minutes left. Clemson then tied the score at 48 on a three-point goal by Christie with 4:32 remaining. The Tigers took a 52-50 lead when Robinson hit a twisting layup from underneath. Robinson then scored again on the next possession to give Clemson a 54-51 advantage with 1:59 left.

It was still 55-53 in favor of Clemson when Robinson made 1-2 free throws with 27.8 seconds remaining. But, Billet then worked free off a screen and hit a three-point goal with 16 seconds left to give Virginia a 56-55 lead. On the next possession the Tigers turned the ball over. Billet ended up with the ball and drove in for a layup with two seconds left. Clemson then threw the ball away on the in-bounds pass and the Cavaliers had their first road win of the season.

“We didn’t start either half very well,” said Clemson head coach Oliver Purnell’s. “We didn’t end the game very well either. Our defense and fundamentals weren’t there. We rebounded well overall, but we gave up some offensive rebounds in key situations late in the game.

“Virginia ran its patented play with Billet coming off that screen. It is in the scouting report. He is their best shooter, a senior with considerable experience and he beat us. Give Virginia credit for hanging in there and getting the job done.

“I thought Olu Babalola played well for us. He gave us tremendous energy. He ignited us in the second half when we got behind.”