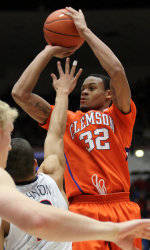 Clemson Drops Another Close One, 76-73 at Miami

CORAL GABLES, FL – Tanner Smith scored a game-high 23 points, but Clemson fell victim to a late 12-0 run as Miami pushed ahead of the Tigers by a 76-73 final at the BankUnited Center on Wednesday. The Hurricanes improved to 10-6 overall, 1-2 in the ACC. The Tigers fell to 9-9 overall, 1-3 in conference play.

Smith made 8-of-13 shots, including 4-of-7 from long distance, coupled with a 3-for-4 effort at the charity stripe. He scored 18 of his points in the opening half. He was supported by 11 points from freshman K.J. McDaniels, who scored double figures for the first time since the UTEP game in the opening round of the Diamond Head Classic. He added five rebounds, a block and a steal in 17 minutes. Catalin “Bobo” Baciu added 10 off the bench, matching his career-high. He made 4-of-7 field goals and added three rebounds in a career-high 19 minutes of play.

The Tigers shot the ball well, connecting on 27-of-57 shots overall, but missed all eight three-point attempts in the second half. Miami shot 51.9 percent, making 27 of 52 attempts. The Hurricanes made 9-of-20 from three and 13-of-14 at the line, 92.9 percent. Miami had five players reach double figures, led by 16 from Malcolm Grant and 14 from Kenny Kadji.

After Clemson built an early 8-6 lead, the Hurricanes rattled off 13 consecutive points before the first official timeout. Miami buried a pair of trifectas during the run, one apiece for Grant and Durand Scott. Smith stopped the bleeding with back-to-back three-pointers to bring the deficit to five. Miami responded with a bucket inside by Kenny Kadji to make it 21-14 in favor of the Hurricanes with 11:44 left in the half.

Miami extended the lead to eight at 23-15, before the Tigers put together a miniature 9-6 scoring run. Smith buried another pair of threes during the spurt, including one from the corner at the 7:14 mark that pulled Clemson to within five at 29-24. Minutes later, Clemson tied the game at 29 on Bryan Narcisse’s third three-pointer of the season.

The Tigers took a 33-31 lead on an old fashioned three-point play by Smith with 4:20 remaining. But, Kadji answered the call for the Hurricanes with a string of eight straight points as Miami reclaimed a 37-35 lead. The lead was extended to five at 42-37 before a pair of McDaniels free throws made it a 42-39 halftime score. Both were first-half highs in a Clemson game this season.

Reggie Johnson opened the second half with a pair of layups on the inside to extend Miami’s lead to 46-39. After a Brad Brownell timeout, the Tigers responded with a 13-8 run punctuated by McDaniels’ emphatic one-handed dunk and the foul. He hit the free throw to pull Clemson within two at 54-52. The Tigers were within one at 59-58 after Smith scored a layup in transition.

Clemson took a three-point lead at 62-59 after back-to-back scores inside by Baciu and Andre Young. The bucket by Baciu put the 7-foot-2 senior in double digits for the second time in his career, and the first time since the game versus South Carolina on Dec. 4. A shot clock beating three by Trey McKinney Jones pulled the Hurricanes to within one at 64-63, and then Miami went ahead 65-64 on two freebies from Kadji. A crazy exchange followed, where Grant claimed a loose ball rebound in the corner to push the lead to 68-64.

The 12-0 run was capped on a layup by Scott with 3:25 remaining. McDaniels broke a four-minute scoring drought with a tip-in that pulled the Tigers to within six at 72-66. Another three-point play by Smith brought the Tigers within five at 74-69, and Milton Jennings followed with a pair from the charity stripe 30 seconds later to make it a one-possession game.

After a Miami turnover, Jennings made a follow shot underneath with 5.8 seconds left. Clemson fouled freshman Shane Larkin, who calmly sank two free throws to make it 76-73. The Tigers turned the ball over on their final possession, ending the game.

The Tigers return home to Littlejohn Coliseum on Saturday, Jan. 21 to take on Georgia Tech. The game will tip off at 2:30 PM and will be televised by the ACC Network.