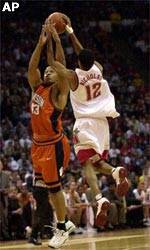 COLLEGE PARK, Md. – Maryland wasn’t about to let this game get away, not after what happened during the previous eight days.

Terence Morris scored 18 points, including three straight baskets down the stretch, as No. 9 Maryland snapped a two-game skid by pulling away to a 69-54 victory over Clemson on Sunday.

Lonny Baxter had 14 points and 13 rebounds for the Terrapins (15-6, 6-3 Atlantic Coast Conference), who never trailed in beating Clemson for the seventh straight time. Maryland was coming off a deflating overtime loss at home against Duke and a 21-point defeat at Virginia.

In that Duke game, the Terrapins blew a 10-point lead in the final 54 seconds of regulation.

Clemson used a 13-3 run to close to 54-50 with 6:14 left, conjuring memories of the debacle against the Blue Devils eight days earlier. But after a Maryland timeout, Morris made a layup, a 15-footer and follow-dunk to put the Terrapins up by 10 with 3:40 remaining.

“You have to get this one,” Maryland coach Gary Williams said. “This game was big. After you lose two, that’s a good win for us because you don’t have a lot of confidence. Clemson made a very good run, and we were able to withstand that.”

Will Solomon scored 19 points for Clemson (10-12, 1-8), which has lost six straight. The Tigers shot a season-low 31 percent and committed 18 turnovers.

“They should be proud, they should hang their heads high,” Clemson coach Larry Shyatt said. “Their measurement should be, because of the profession we’re in, wins and losses. But they should also measure that inner game too. What are they doing with what they have.

“I thought our trying and tenacity was excellent,” he said. “I thought we out did them in every capacity a team could to negate size, speed and inordinate talent.”

Juan Dixon had 11 points and 11 rebounds for Maryland, which has played 112 home games without consecutive losses. It was the second career double-double for the junior guard, who matched his career high in rebounds.

“They got a couple of open 3’s and we were able to answer that run and put them away,” Dixon said. “It says a lot about our team.”

After letting a 17-point lead dwindle to 11, the Terrapins opened the second half with a 6-0 run that included a 3-pointer by Dixon.

Clemson closed to 49-37 before Baxter missed two layups, got his own rebound each time and put the ball back in on the third attempt to give Maryland a 14-point cushion. The Tigers fought back, but this time Maryland held on.

“It was a very big win,” point guard Steve Blake said. “We needed a win to get going.”

Asked if the Terrapins laid to rest memories of Duke, Williams replied, “You want us to dwell on it next week, too? We blew a game to the second-ranked team in the country. It’s no fun, but you can’t worry about that one when you’ve got Georgia Tech to play on Tuesday.”

The Terrapins led 33-22 at halftime after limiting Clemson to 30 percent shooting and forcing 11 turnovers. The 22 points was the Tigers’ lowest first-half output this season in an ACC game.

Blake set the tone off the opening tap by drilling a 3-pointer, only his 14th in 21 games this season. In the first eight minutes, Clemson missed eight of 10 shots and committed five turnovers.

A dunk by Baxter and two driving layups by Dixon made it 18-8, with all the Tigers’ points coming on baskets by Solomon.

After Pasha Bains hit a 3-pointer for Clemson, Maryland reserve Chris Wilcox scored five straight points to cap a 10-0 run that put the Terrapins ahead 28-11.