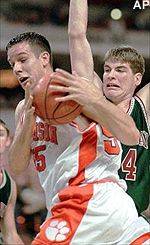 While the Mountaineers’ (12-5) win over an Atlantic Coast Conference team sounds like an upset, this year it’s the norm for both teams.

Appalachian State had nearly pulled out games at Marquette and Pittsburgh, and defeated Toledo. Clemson (6-11) has already lost home games to Wofford and South Carolina State.

Patterson made sure the Mounties of the Southern Conference didn’t miss this chance.

He had four points during a 15-4 first-half run that put Appalachian State out front 35-23. And when the Tigers had closed the lead to 46-39 on Will Solomon’s 3-pointer with 13:59 to go, Patterson came back with a three-point basket and another jumper to restore control and send the Mountaineers to their seventh-straight victory this season and their first in eight tries against Clemson.

For the Tigers, it was just another step on the way to bottom. Picked for last in the ACC, they lost their fifth straight this season and are 2-2 against the Southern Conference this year.

Solomon, who lit up Virginia for 43 points this past Saturday, missed his first seven shots and finished with 12 points, 10 less than his average. Adam Allenspach, the tallest player on the court at 7-foot-1, led Clemson with a career-high 24 points.

Andrius Jurkunas, the team’s only senior, missed his three 3-pointers in the first half and scored only four points.

Walk-on Walker Holt was the Tigers’ second-leading scorer with 12 points.

The Tigers bobbled balls – Allenspach had four turnovers beneath the basket in the opening period – and were constantly outhustled by Mountaineers. Down 58-48 with four minutes remaining, Jurkunas was called for charging as Appalachian State’s Corey Cooper sat on the floor where he landed and pumped his fists.

Cooper added 12 points for the Mountaineers.

In the first half, Appalachian State got hot at the right times. They opened with a 7-0 run and, after leading only 20-19, outscored Clemson 15-7 the rest of the way.

Appalachian State, behind Patterson’s 11 points, led by 12 points with seconds left. But Holt nailed a desperation heave from half court to make it 35-26.