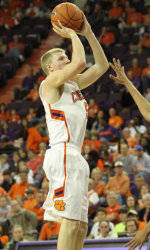 CLEMSON, SC – The Clemson Tigers rode an efficient offensive effort from its senior leaders and a stifling second half defensive performance to a 60-40 victory over the Winthrop Eagles at Littlejohn Coliseum on Saturday night. The victory pushes the Tigers above the .500 mark for the season at 5-4, while the Eagles fell to 4-7.

“This was a good win for us,” Clemson Head Coach Brad Brownell said. “Winthrop can be a dangerous team. Their guards can really score. I thought we did an unbelievable job defensively. To win a low-possession game by 20, that was pretty good play.”

Tanner Smith and Andre Young paced the Tigers in scoring, pouring in more than half of the team’s point total. Smith tied a career-high with 17 points on only nine field goal attempts, converting on two of his three shots from three-point range. He also added five rebounds and five assists in the game. Young added 15 points on eight shot attempts and dished out four assists in the game.

Winthrop had three players in double figures, led by Andre Jones’ 12 points. The Eagles’ leading scorer, averaging 19.4 points per game coming into the contest, was just 5-for-13 from the floor. Reggie Middleton added 11 points, while Matt Morgan had 10.

The Tigers made exactly half of their field goal attempts for the game, converting on 21 of 42 attempts, and held the Eagles to 31.9 percent from the floor (15-47). Clemson’s defense was particularly effective after halftime, when the Tigers held the Eagles to just 23.8 percent shooting (5-21) and 16 total points.

Winthrop battled back and cut the Clemson advantage to four with 3:27 to play in the first half on a pair of Morgan free throws. But back-to-back buckets by Smith gave the Tigers an eight-point lead.

Clemson’s longest run of the game stretched across both halves, when the Tigers enjoyed a 17-4 run over the final 3:27 of the first half and the opening 4:46 of the second half. When Booker converted a layup to give Clemson a 41-24 lead, the game was virtually out of reach.

The Eagles scored their first points of the half on a Jones layup with 15:14 remaining, missing six consecutive shot attempts. The smallest lapse of time between baskets for Winthrop was 2:09, as Clemson contested shots and forced turnovers.

Meanwhile, the Tigers were 10-of-18 from the floor down the stretch. They made four out of five opportunities from three-point range in the second half as well.

The Tigers will return to action on Monday, December 19 as they play host to Alabama State. Tipoff is scheduled for 7:00 PM from Littlejohn Coliseum.