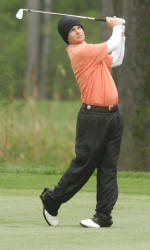 FORT WORTH, TEXAS – David May’s 7 and 5 victory made the difference in Clemson’s advancement to the second round of the Callaway Golf Collegiate match Play championship on Sunday. The Tigers, seeded fifth, tied 12th seeded Washington 2-2-1. But Clemson advanced by virtue of the fact that Clemson won 29 holes over the five matches compared to 20 for Washington.

May won 7 and 5 and his victory margin made the difference for the young Clemson squad. The Tigers advance to face defending NCAA Champion and fourth seed Oklahoma State on Monday.

Phillip Mollica of Anderson and May were the two Tigers to gain victories on Sunday. Mollica defeated Nick Taylor of Washington 3 and 2. Sam Saunders, fresh off a top 10 finish in his first career event at Isleworth last week, halved his opponent, Zach Bixler of Washington. Kyle Stanley, Clemson’s number-one player for the event, lost one up to Alex Prugh of Washington and Ben Martin suffered a 2 and 1 loss to Erik Olson.

In other first round action, Top-seeded Florida edged Arizona, 3-2, and will face Duke – a 3-1-1 winner over UNLV. Oklahoma State – the fourth seed – downed NC State 4-1. Second-seeded Georgia recorded a 4-1 win against Minnesota and will meet seventh-seeded Texas A&M, a 5-0 victor over Arizona State. UCLA – the third seed – claimed a 3-2 match against Auburn. Lamar upset it No. 6 seed Coastal Carolina, 3-2, in the final match of the third round.