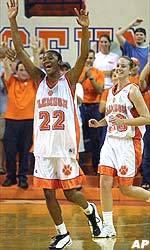 Clemson, SC – Lakeia Stokes and Chrissy Floyd both scored 20 points leading Clemson to a 65-46 victory over Wake Forest on Sunday afternoon at Littlejohn Coliseum. The victory avenged a 58-46 Wake Forest victory in Winston-Salem a month ago to the day. Clemson improved to 15-10 overall and 7-7 in the ACC, while Wake Forest fell to 10-15 overall, 4-11 in the ACC.

Stokes made her first start of the season and she responded with a career high 21 points and a career high 10 rebounds, her first career double-double. It was just the second 20-point game of her career, as she had 20 against Miami (OH) back in December in a reserve role. Stokes made 8-11 shots from the field, 1-1 on three-point shots and 4-5 from the foul line, all in 29 minutes. Floyd had her 20 points in 39 minutes. A career best 10-10 from the foul line keyed her performance, which also included four assists and three steals. The 10-10 free throw shooting performance was the highest perfect free throw shooting game for a Lady Tiger since Itoro Umoh was 12-12 at North Carolina on Feb. 1, 1998. Umoh was in attendance at the game Sunday, as it was Alumni Day for the Lady Tigers. Floyd’s performance was only the fourth time in Clemson history that a Lady Tiger had a perfect day at the line with at least 10 attempts.

Free throw shooting differential had a lot to do with Clemson’s win. The Lady Tigers made 20-23, Clemson’s second best free throw shooting percentage this season (.870), while Wake Forest made just 8-17 for 47 percent. Clemson won the rebounding 33-30. Clemson jumped out to a 7-0 lead to open the game, but that was Clemson’s largest lead of the first half. Tiffani Listenbee scored eight of Wake Forest’s first 10 points of the game and led Wake Forest to a 10-9 advantage seven minutes in. The margin was never more than four points the rest of the half for either team. The close margin continued over the first 14 minutes of the second half. The lead changed hands four times and was tied two other occasions. Tonia Brown made a three-point goal with 6:26 left to cut Clemson’s margin to 45-42.