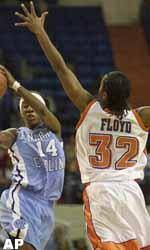 Clemson, S.C. — Junior guard Chrissy Floyd scored 24 points and Clemson made 13 of 18 free throws inside the last five minutes of the game, as the Lady Tigers downed Virginia 73-65 in ACC women’s basketball Thursday night at Littlejohn Coliseum. Clemson has now won four of five, all in ACC play, and improved to 14-8 overall, 6-5 in the ACC. Virginia fell to 12-10 overall and 5-6 in the ACC.

Clemson swept the season series for the second straight year and now has four straight wins over the Cavaliers. Clemson now travels to Duke, a perfect 11-0 in the ACC for a game Sunday afternoon at 1:00 PM.

Floyd led the Lady Tigers for the second time this year against Virginia. She had a career high 28 points in the first meeting between the two teams, a 79-68 win at Virginia. Floyd played for Virginia Coach Debbie Ryan on the United States team in the World University Games this past summer.

Floyd was supported by Julie Aderhold, who scored 11 points off the bench on 5-7 shooting, and senior Marci Glenney, who added 10 points and six rebounds. Maggie Slosser had all seven of her points in the second half and added seven rebounds. Leah Roper started at forward and had eight points and seven rebounds.

Virginia was led by talented guard Telisha Quarles who scored 22 points, 11 in each half. Anna Prillaman added 11 points and played 38 minutes without a turnover. Lynette O’Reggio looked like a star of the future as the Virginia freshman had a double-double with 10 points and 10 rebounds in just 11 minutes of play. Clemson held Virginia’s number-two score on the season, Brandi Teamer to just seven points on 3-15 shooting. Teamer had been averaging 18 points a game in league play and was coming off a 22-point performance in a win over NC State.

Clemson had a season best 48.1 percent shooting night from the field, as the Lady Tigers made 25-52 shots. In fact, it was the first time all year Clemson had shot over 45 percent against an ACC team. Clemson also hit 21-27 from the foul line for 77.8 percent. Clemson’s last nine points of the game came at the foul line. Clemson’s defense held Virginia to 33 percent shooting overall. The Cavaliers hurt themselves from the line, making just 15-29 on the evening.

The game was close throughout as neither team ever had a double-digit lead. Clemson jumped out to a 13-7 lead in the first five minutes behind the play of Julie Aderhold. The sophomore made her first three shots of the night, including a three-point goal. Neither team made a strong run in the first half and Clemson held a 28-26 lead at intermission. Clemson never trailed over the first 28 minutes of the game.

Clemson got the lead back to six at 39-33 on a field goal by Floyd, but Virginia came back to tie the game at 43 on a free throw by O’Reggio with 12:23 left. Virginia then forged ahead by four points with 10 minutes left on a jumper by Quarles. But, that 47-43 lead would be the largest of the game for Ryan’s team.

Clemson went from four down to six ahead with an 11-3 run that featured two field goals by Floyd. With 5:30 left her jumper gave Clemson a 56-50 lead. Clemson increased the margin to nine, its highest of the game, when Lakeia Stokes all alone for a layup on the baseline. Virginia cut the lead back to five in the closing moments on a three-pointer by Quarles with 42 seconds left, but that was as close as Virginia could get.

Clemson made 13 of its last 18 free throw attempts, including 6-6 down the stretch by Floyd, who was a perfect 8-8 from the line for the night.

“The key to the game was us playing more aggressive in the second half,” said Clemson Head Coach Jim Davis. “We converted our free throws down the stretch. Chrissy Floyd had another good all-around game. She was aggressive taking the ball to the hoop, then converting from the line. We have a big game coming up with Duke. Hopefully we can bring this intensity with us to Durham on Sunday.”