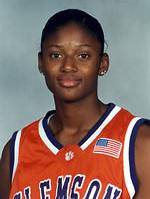 Clemson, SC – Lakeia Stokes, Julie Aderhold and Julie Talley made the key three-point shot in overtime to lead Clemson to a 103-99 overtime victory over South Carolina in women’s college basketball at Littlejohn Coliseum Friday night. It was the season opener for both teams.

The Lady Tigers avenged a 72-58 loss at South Carolina in the season opener last season and it was Clemson’s eighth win in the last nine meets between the two teams. It was the highest scoring Clemson vs. South Carolina women’s game. The previous high was the only other overtime game in the history of the series took place in 1981-82 when South Carolina prevailed 99-91. Clemson now leads the series 30-19, including a 21-4 record at Littlejohn Coliseum.

Stokes led Clemson with 32 points, 11 more than her previous career high. She played 42 of the 45 minutes and made 14-20 free throws in the game. Her free throw attempt total tied the Clemson single game record of 20 by Melinda Ashworth against Virginia in 1985-86. Stokes added 14 rebounds, also her career high, and it was her second double-double as a Lady Tiger.

Aderhold added 24 points on 9-20 shooting. She made 5-9 three-point goals and also added seven rebounds in her 42 minutes of play. Queen had 13 points, and seven assists. Her scoring total included 2-3 on three-point shots. The senior had made just four three-point goals in 83 games coming into Friday night’s contest.

Talley connected on 5-8 shots from the field and scored 15 points, while Maggie Slosser had 12 points and nine rebounds as she battled South Carolina’s taller front line.

South Carolina was led by Cristina Ciocan, who recorded a triple-double, the first triple double ever against Clemson. The senior from Romania had 22 points, 13 assists and 10 rebounds in her 42 minutes of play. Olga Gritsaeva had 20 points and 14 points and connected on 9-12 shots from the field. Guard Kelly Morrone added 21 points on 7-14 shooting, including 5-12 on three-point shots.

Clemson held the lead for all but one of the 40 minutes in regulation. Clemson jumped out to a 9-2 lead in the first two minutes and scored 30 points in the first 10 minutes of the game.

Clemson had a 14-point lead late in the second half, but South Carolina made a run at the end of the game, that was culminated by a three-point goal by Morrone with two seconds left that sent the game into overtime tied at 91.

South Carolina hit the first basket in overtime and had a 95-93 lead with two minutes left when Talley nailed a long three-point goal to give the Lady Tigers a 96-95 advantage. South Carolina never retaliated and Clemson held the lead the remainder of the game. South Carolina made just 3-18 shots in overtime, while Clemson hit 7-12 free throws to put the game away.

Clemson held a 53-44 lead at intermission behind outstanding shooting in all phases of the game. Clemson shot 18-34 overall from the field, 53 percent, 7-15 on three-point shots, 47 percent, and 10-12 from the foul line. The Lady Tigers also had a +6 turnover margin as Jim Davis’s team committed just nine turnovers and forced 15 lady Gamecock miscues.

Stokes scored 19 points in the first half on 6-12 shooting and also added five rebounds and four assists. Aderhold added 13 points, including 3-6 on three-point shooting. Julie Talley combined for 13 points and seven assists and four steals at the point guard position.

South Carolina was led by Olga Gritsaeva in the first half with 10 points, while Kelly Morrone added nine. Guard Cristina Ciocan had seven points, six rebounds and seven assists in a productive first half and was on pace for a triple double.

Clemson hit from the outside and took a 15-5 lead at the outset of the game behind three-point shooting by Talley and Stokes. Clemson increased the lead to 14 at 38-24 with six minutes left in the half on a bucket by Aderhold.