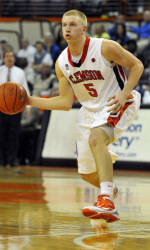 The Tigers (7-2) used a late 18-6 run to pull away – and bounce back from a bad defeat to Illinois on Wednesday night when they surrendered a 23-point second-half lead and lost 76-74.

In this one, Clemson got back on track by holding Devan Downey of the Gamecocks (6-2) in check.

Downey a scored a career-high 37 points against the Tigers last season. But he was just 3 of 15 from the field for eight points.

Even missing the two 6-foot-7 forwards, the Gamecocks did a solid job keeping Clemson’s Trevor Booker off balance. He finished 2 of 9 from the field for seven points and committed four of Clemson’s 19 turnovers.

The Gamecocks had cut a 10-point deficit to 52-50 on Raley-Ross’ fourth 3-pointer. That’s when Stitt and Smith took control.

Stitt drove for a basket and Smith followed with a 3. Jerai Grant added two inside baskets to put Clemson up 63-54. Smith and Stitt ended the run with two foul shots each and the Tigers led 70-56.

At the end, a few South Carolina fans chanted, “It’s not football,” a reference to the Gamecocks’ 34-17 victory over the Tigers on Nov. 28.

Clemson coach Oliver Purnell was anxious to see if his team was past the shock of the Illinois collapse.

The Tigers showed they were from the start, grabbing a 14-6 lead as David Potter had two 3-pointers and Stitt added one from long range.

Downey was 0 of 6 from the field in the first half. However, freshmen Lakeem Jackson and Ramon Galloway combined for 17 points to keep the Gamecocks in it in the first 20 minutes.

Jackson, a 6-5 forward, had South Carolina’s first two field goals and three steals. Galloway, Downey’s backup at the point, shot 5 of 9 for 11 points in the first half.

Downey had trouble getting free of Stitt, who chased him all over the court and blocked his shot on what looked like an easy breakaway.

Booker couldn’t get free inside against South Carolina’s zone and missed both shots he attempted.