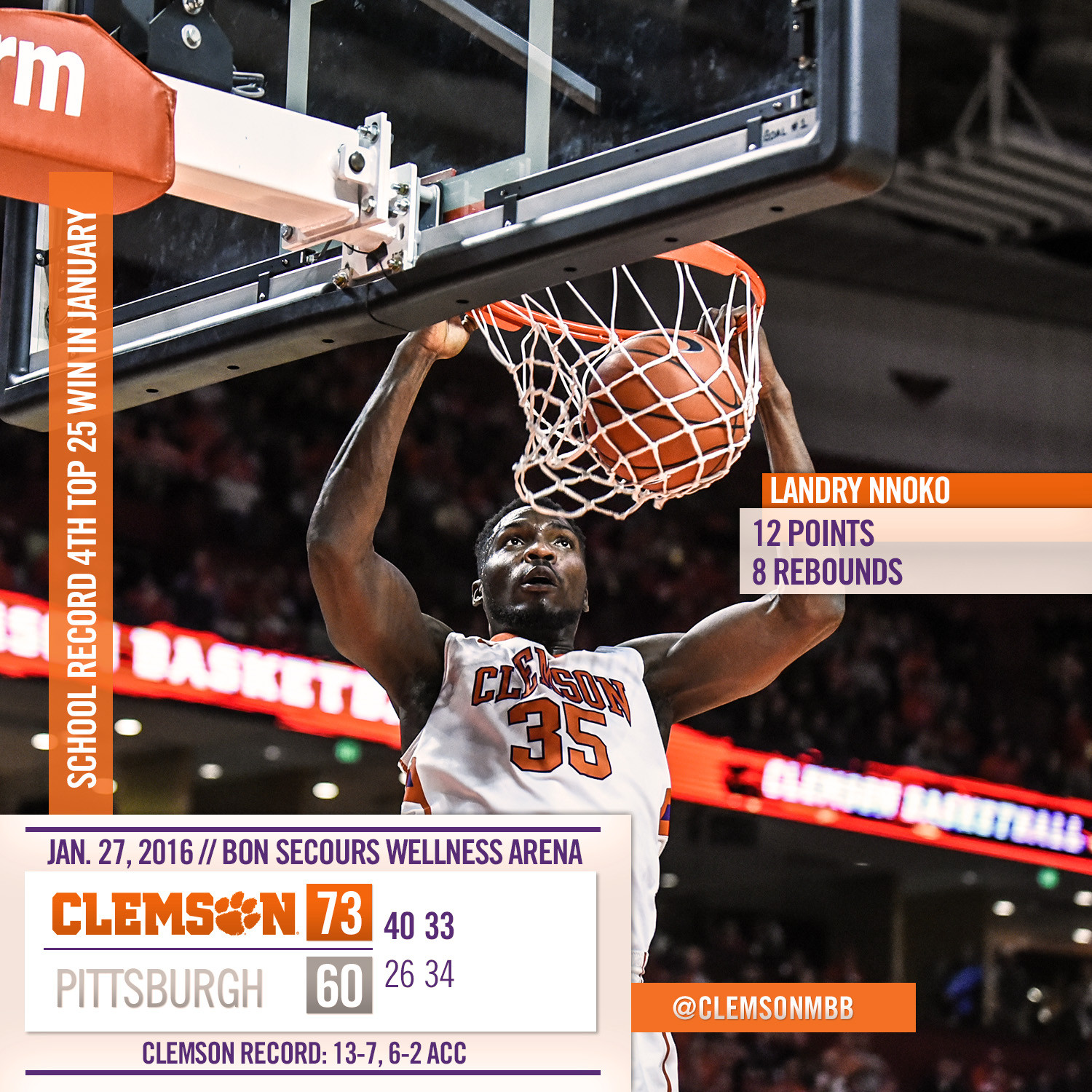 GREENVILLE, S.C. — Four Clemson players reached double figures as the Tigers defeated the No. 23 Pittsburgh Panthers 73-60 on Wednesday. The win marks the Tigers’ fourth over a ranked team, all since January 10, the most at Clemson since the 1996-97 season.

Jaron Blossomgame finished as the Tigers’ leading scorer with 22 points, while shooting 7-11 from the field. Jordan Roper and Avry Holmes each finished with 13 points apiece, while Landry Nnoko added 12 points and eight rebounds. The Tigers held Pitt to just 38 percent shooting, including just 36 percent after intermission.

Blossomgame and Roper got the Tigers rolling early in the first, with both accounting for 25 of the Tigers’ first-half 40 points, with both going 2-3 from beyond the arc. Blossomgame was a threat to Pittsburgh early, putting up the first five points for the Tigers. Roper found his three-point stroke at the 13:27 mark, and came up with big plays for the Tigers in the first half, one of which included a steal directly following his own three-point score with 6:17 to go in the half to extend the Tigers’ lead 29-17.

The Tigers’ defense was sound in the first half, as the Panthers struggled from beyond the arc. Clemson held the Panthers to 3-8 from three-point range and never allowed Pittsburgh to retake the lead after a jumper by Roper to move ahead 14-12 with 11:43 to go in the half. On the offensive side, Clemson also stayed aggressive from beyond the arc, shooting 56 percent from three to take a 14-point lead heading into halftime.

Heading into the second half, the Tigers continued to stay aggressive on offense, with Nnoko scoring eight of the Tigers’ first 12 points to begin the half. Pittsburgh began to find some life in the second half, cutting the Clemson’s lead to nine points with 10:54 left in regulation. But the Tigers got a clutch three-pointer from the left wing by Gabe DeVoe to extend the Tigers’ lead back to 12.

From there, Clemson continued to maintain its double-digit lead over Pitt, who couldn’t find any answers against the Tigers’ offense. In the game’s final stretch, with Clemson still maintaining a 12-point lead and Pittsburgh attempting to mount a comeback, Donte Grantham came up with a crucial three-point play to extend the lead to 15, which sealed the victory and any chance of a Panther comeback.

The Tigers return to action Saturday at Florida State. The two teams square off at 12 p.m. in the Donald L. Tucker Center.