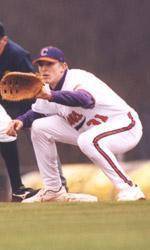 Clemson, SC — Chad Coder and Colin Mahoney all hit three-run homers and starting hurler Steven Jackson pitched two-hit shutout baseball over the first six innings, leading second-ranked Clemson to a 13-0 win over Maine at Kingsmore Stadium Friday night. It was the second straight night that Clemson had shutout Maine, as the Tigers won the first game of the series on Thursday night, 8-0.

The Tigers hit four home runs overall as freshman Roberto Valiente added his first career home run in the bottom of the seventh. It was a two-run shot.

The victory increased Clemson’s record to 17-1 for the season, while Maine fell to 9-4. It was the second consecutive win for the Tigers over the Black Bears and the ninth in a row for Jack Leggett against his alma mater as Clemson head coach. The same two teams meet in the final game of the series Saturday afternoon at 2:00 PM.

Johnson hit his 10th home run of the season in the fifth inning, tying a Clemson record in the process. The home run came in his 18th game of the year, tying George Sutton’s Clemson record for reaching 10 home runs in the fewest number of games to open the season. Sutton also hit his 10th home run in the 18th game of the 1966 season in a game against Wake Forest.

Freshman catcher Collin Mahoney added a double and a home run and drove in three runs to help Johnson and the Clemson offense. Clemson made the most of its hits, as the Tigers had just nine hits in scoring their 13 runs. Eleven of the 13 runs were scored on home runs. Clemson was helped offensively by Maine pitchers that issued 11 walks.

Jackson allowed just two hits in working the first six innings of the contest. The sophomore from Summerville, SC struck out four and walked none in his most efficient outing of the season. He is now 3-1 for the season. B.J. LaMura pitched a perfect seventh and eight, while Paul Harrelson retired Maine in the ninth.

Maine had just two hits the entire night, singles by Jesse Carlton in the second and Joe Drapeau in the fourth. Clemson pitchers have now issued just one walk in 18 innings against Maine over the first two games of the series.

Clemson broke open the game with two runs in the fourth and six in the fifth. In the fourth, Khalil Greene opened the inning with a walk and moved to second on a single by Jeff Baker. Johnson then drove in the first run of the game with a single to right off Maine starter and loser Rich Laganiere (2-1). Jarrod Schmidt then singled to right to score Baker with the second run.

Clemson hit a pair of three-run homers in the fifth to break the game open. Greene and Baker walked with one out, then scored on Johnson’s home run to right. Schmidt then singled and Brandon Hourigan walked before Chad Coder homered to give Clemson an 8-0 lead. It was his first homer of the season.

Clemson added five in the seventh, a three-run homer by Mahoney and a two-run shot by Valiente.