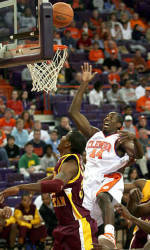 Clemson, SC – Clemson center James Mays scored 19 points and K.C. Rivers added 17 to lead Clemson to a 99-55 exhibition basketball victory over Lithuania Academy Tuesday night at Littlejohn Coliseum. It was the only public exhibition game for Oliver Purnell’s Tigers, who open the season November 10 against Arkansas State in the Cox Communications Classic in Norfolk, VA.

Clemson had five players in double figures and shot 54 percent from the field in gaining the victory. Supporting Mays and Rivers were starting point guard Vernon Hamilton, the team’s only senior, who had 16 points, four assists and four steals, and starting wing guard Cliff Hammonds, who added 13 points, including 10 in the second half. Sam Perry rounded out the double figure scorers with 10 points and headed seven assists and seven rebounds.

Vidmantas Uzkuraitis led the Lithuania Academy with 17 points, while Rytis Grigaitis added 11 points off the bench.

Clemson dominated the game in a number of areas. The Tigers won the rebounding 51-26, had 28 assists against just 15 turnovers and had 24 steals on defense, leading to 29 Lithuania Academy turnovers. The Tigers committed just 11 fouls and had 24 steals, a total that would have been second best in Clemson history had it not been an exhibition game.

The Lithuania Academy scored the game’s first five points, then Clemson went on an 18-5 run to take a 23-10 lead at the 11:51 mark. Mays scored nine of Clemson’s first 23 points, including four at the foul line. Clemson held a 30-14 lead before the team from Lithuania went on an 11-0 run behind the play of Grigaitis, who scored nine consecutive points to bring his team to within 30-25. Clemson then outscored Lithuania 14-7 the rest of the half to take a 44-32 lead at intermission.

Clemson went on a 32-7 run to open the second half in just nine minutes to put the game away. The Tigers converted 14 of their first 20 shots of the second half and opened the lead to 80-39 with 9:51 left. The Tigers had great balance during the stretch, but Cliff Hammonds did make a pair of three pointers and scored 10 second-half points.

Clemson outscored Lithuania 55-18 in the second half when the Tigers shot 61 percent from the field. Clemson’s largest lead of the game was 51 points at 99-48 with 2:27 left. Clemson never could get over the 100-point mark as Purnell played subs, including four walk-ons over the last three minutes.