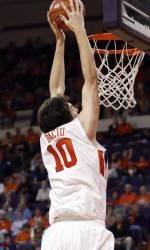 It was the final tune-up for the Tigers, who open the Brad Brownell era next Friday night against Western Carolina at 8:00 PM at Littlejohn Coliseum.

Clemson had three double figure scorers off the bench, led by Baciu, who had 10 points and 10 rebounds. The 7-2 junior center made 4-5 from the field and had four offensive rebounds to go with three blocked shots in his 17 minutes of play. Freshman guard Cory Stanton, the only freshman on this year’s Clemson team, scored 11 points and Bryan Narcisse added 10 points and seven rebounds.

Belmont Abbey, the school where Hall of Fame coach Al McGuire got his start as a head coach in 1957, was led by Kyle Phillips with 14 points and Tyshawn Good with 13 points.

Neither team scored for the first two and a half minutes, but the Tigers caught fire after that. Clemson opened a 19-8 margin at the 12-minute mark on a dunk by Tanner Smith.

Clemson held a commanding 54-24 lead at intermission. Young had 10 points in the first half to lead the Tigers, who shot 56 percent from the field and had more steals (9) than turnovers (6).

Clemson’s defense held Belmont Abbey to 36.4 percent shooting for the game, including 28 percent on three-point shot. The Tigers forced 21 turnovers. Clemson finished the night with more steals (12) than fouls (10) and blocked nine shots.

The game included a five-minute appearance by Belmont Abbey guard Ryan Conrad. He is the son of former Clemson Hall of Fame player Bobby Conrad, the starting point on Clemson’s 1979-80 team that reached the Elite Eight of the NCAA Tournament.

Ryan Conrad began his college career last season at Wagner College and scored 20 points in his first collegiate game. He transferred to Belmont Abbey at the semester break, but this past August, he was diagnosed with a hip ailment that will force him to give up basketball.

He had not scrimmage since finding out the diagnosis in August. But, he wanted to play his final college game at Clemson, where his father had starred 30 years ago. He realized that dream Friday night and played five minutes without a turnover and had one assist.