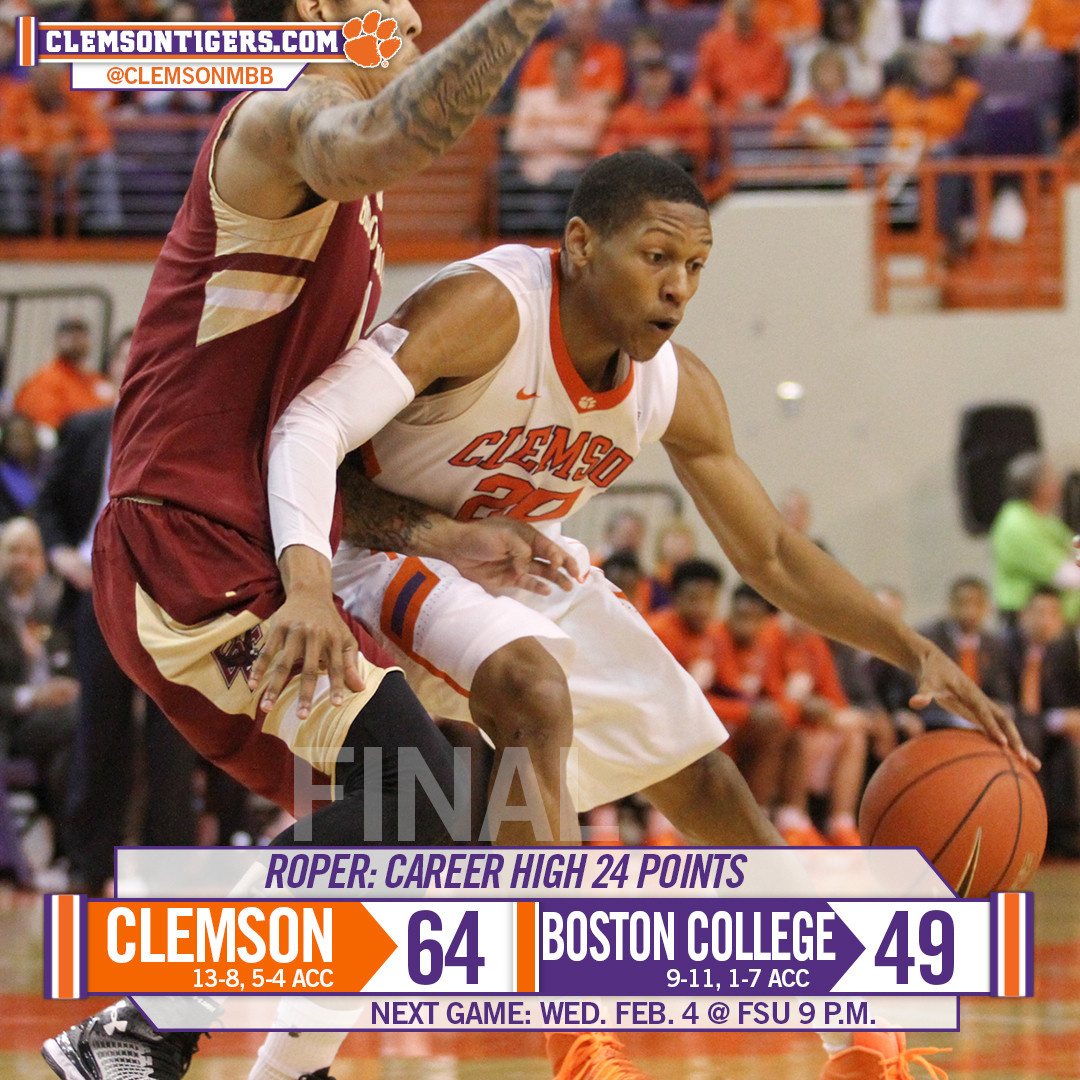 Clemson Downs BC on Alumni Weekend, 64-49

CLEMSON, S.C. — Jordan Roper scored the team’s first 11 points and Clemson won its third ACC game in seven days, defeating Boston College 64-49 Saturday afternoon in Littlejohn Coliseum. The Tigers improved to 13-8 (5-4 in the ACC), and the Eagles fell to 9-11 (1-7).

Boston College jumped to an early lead following a Patrick Heckman three-pointer, but 11 straight Roper points secured the advantage for the Tigers. Clemson pushed the lead to 27-10 after Roper knocked in a pair of free throws with 5:38 remaining in the opening half, but was held scoreless until intermission entering the break with a 27-16 lead.

While Roper ignited the Tigers in the opening minutes, Jaron Blossomgame produced the spark in the second half. The sophomore was held scoreless in the first half, but posted 16 points after the break. An explosive Blossomgame dunk pushed the lead to 43-22 with 14:13 remaining in the game, and Clemson was once again firmly in control.

“We played very well,” said Clemson coach Brad Brownell. “We had a few stop and start droughts when they were changing defenses, but we hung in there and fought through it.”

Roper finished the contest with 24 points and 6-for-8 from behind the arc. The junior has averaged 21 points in two games this week, and his recent emergence has played a big factor in the three-game Tiger win streak.

The suffocating Clemson defense held Boston College to its lowest scoring output of the season (49), well under its scoring average per game. Unsung hero Rod Hall created havoc for Eagle star Olivier Hanlan, who scored just three points in the first half and earned most of his 15 points after the game was out of reach. Hall also had six assists and no turnovers.

The Tigers travel to the Sunshine State for a pair of games next week, starting Wednesday night at 9 p.m. against Florida State. The Seminoles won the first contest of the season between the two rivals, 59-55 in Littlejohn Coliseum.

[View the story “Clemson vs. Boston College” on Storify]