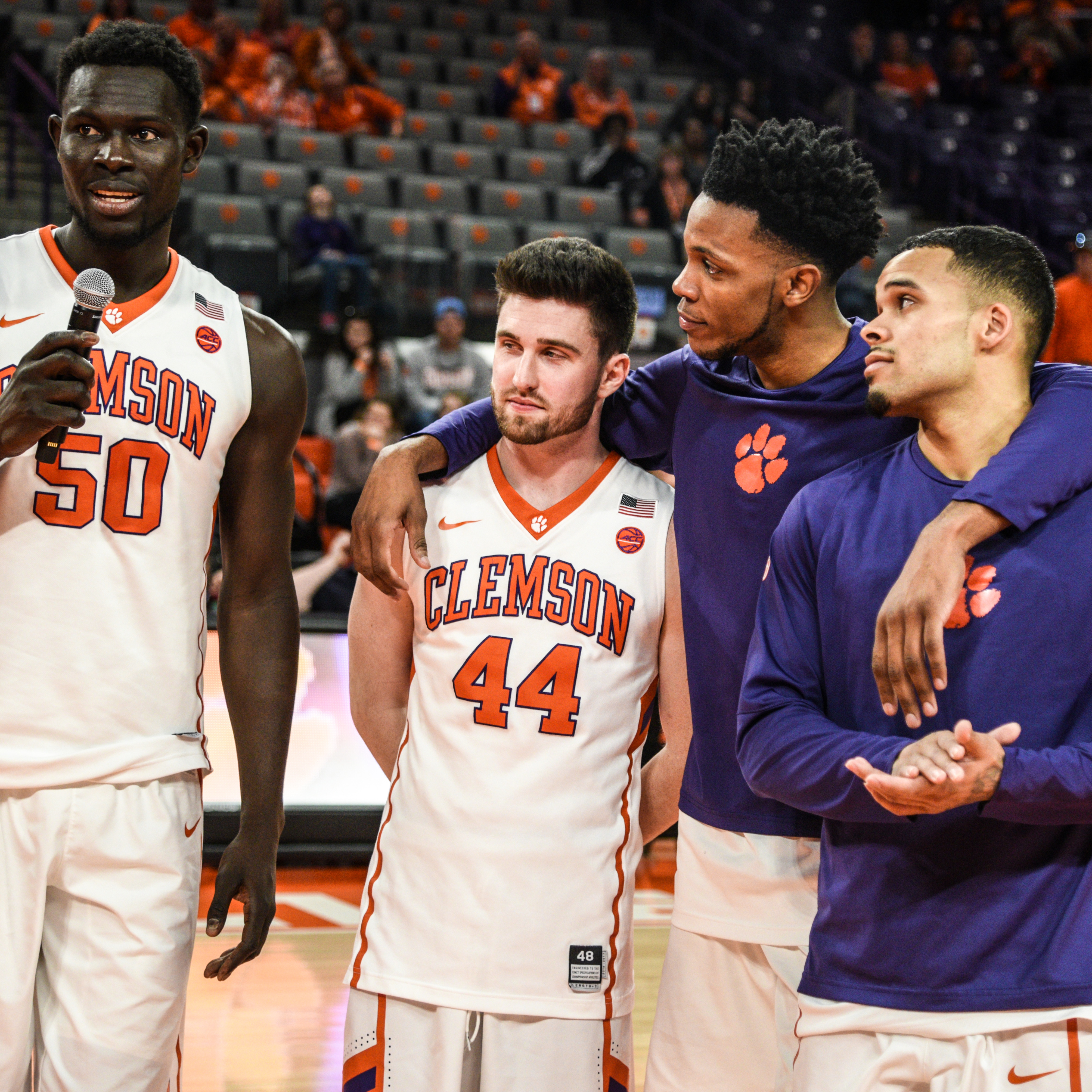 After the teams traded blows early in the half, Holmes caught fire in the final 1:33, drilling three trifectas to propel Clemson to an 11-0 run and a 42-26 lead going going into the break. The Tigers shot a blistering 15-24 from the floor in the frame, the highest percentage in any half this season.

The Tigers extended their lead to 21 on Gabe DeVoe’s three pointer with just over eight minutes to play, as the Eagles never got closer than a dozen the rest of the way. The four Tiger seniors, who were honored before the game, combined to go 16-31 from the floor with 43 points and 22 rebounds in the contest.

Sophomore Shelton Mitchell netted 14 points, with 10 coming in the second half, including a couple of emphatic dunks. Holmes recorded his first double-double in his 123rd career game, as he added a career-best 10 rebounds, and tied a career-high with five three-pointers.

The Tigers head to Brooklyn, N.Y., for the New York Life ACC Tournament next week. Clemson is the 12-seed and will take on 13-seed NC State in the opening game of the event at the Barclays Center on Tuesday, March 7 at noon.

“I’m really happy for our seniors finishing off their careers the right way. Certainly, I thought that Avry Holmes’ shooting at the end of the first half was a big difference-maker in this game. He’s had a great year shooting the basketball, and it’s really fun to see him have a big day. 17 points, 10 rebounds, made five threes. He was terrific. Jaron (Blossomgame) was very steady, as usual. They doubled him some, and he kicked it out twice to Avry for threes. So I thought he had another good game. 17 points, seven rebounds and three assists. Sidy (Djitte) just does what he does. Very dependable. Very hard-working. I’m proud of our team for sticking through a really hard season. This has been, obviously, a year where we’ve been punched in the gut several times and probably taken a couple standing eight counts, but we certainly haven’t given in. Our guys have kept competing these last three games at home and have played pretty well. Boston College is an improving team and has given a lot of teams problems, and I thought we played well to keep them at bay today.”

On his expectations for the ACC Tournament:

“I have confidence in our team. I think we’re a good team; I really do. I know our record isn’t what we would like it to be, and there are certainly a bunch of games that have come down to the wire and several that we haven’t been able to close out, but I think our team isn’t going to be in awe of anyone we play or not confident that we can’t play on a big stage. But we just have to win the first game. At the end of the day, you’re just trying to advance. It’s nice that we’ve won two this week and played pretty well the last five games of the year, and I hope that continues. I feel good about our team and am hopeful that we’ll play well at the right time.”

On Clemson’s great offensive showing late in the first half:

“It certainly was a huge part of the game. That’s where the separation occurred, and we obviously have the ability to do that. When teams double, and the kick-outs are there, Jaron has done a good job of finding different guys. Some teams have decided to double, and some haven’t. And when they don’t, then Jaron gets more shots and free throw attempts. I think we’ve done a pretty good job throughout the year of reading how we’re being played and playing accordingly.”

On the depth of the ACC:

“This year, I just think there’s incredible depth in our league. And how many good players are on each roster? That’s just how this league is. We finished 12th, and we have Jaron Blossomgame, who has done something that only four other guys in the history of Clemson basketball have done. We’re a pretty good 12th place team. It’s been an unbelievable year in terms of the teams we’re playing and the quality of the play and the amount of shot-makers on each team. It’s been a very difficult league.”

“It was individual defense for us. We did a really poor job of containing the ball, live dribble, all on the perimeter. (Jaron) Blossomgame is a great player, but I thought we actually did a pretty good job on him. Obviously, Avry (Holmes) shoots the ball at a great rate, so, in the last three minutes of the first half, we did a bad job with him. We should’ve done a better job. I’ve never seen a game in 27 years where one foul has been called the whole second half. I’ll have to watch the tape. We probably weren’t going to the basket aggressively enough.”

On his team’s ACC Tournament outlook:

“We’ll keep getting better. We’ve gotten better. We just got to keep adding pieces to what we’re trying to do. We’ve got a good foundation now. So between now and Tuesday, we just got to hit the gym and keep rolling.”

On Jordan Chatman’s solid play in the second half:

“It was good to see him break out of it. He hasn’t played well, but in the second half, he came and played well. He’s a good player. We need him to play the whole game. First half, he would be the first one to tell you, he had some great looks that he’s got to knock in to keep us in the game.”