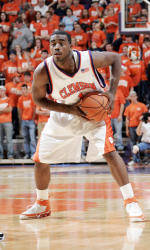 Norfolk, VA – The Clemson men’s basketball team won its 22nd consecutive season opener Friday by defeating Arkansas State 83-44 in the first round of the Cox Communications Classic. All 15 players on the Tiger roster played versus the Indians, with 12 scoring at least one field goal for Clemson.

K.C. Rivers totaled 15 points to lead a balanced scoring effort by the Tigers. The sophomore from Charlotte, NC shot 6-9 from the field (3-5 from three-point range), while also adding four assists and two steals. James Mays, playing in his first game since December 21, 2005, added 13 points on 6-10 shooting. David Potter, a freshman from Severn, MD, was a third Tiger player to reach double figures Friday as he posted 12 points and hit 5-10 shots.

Freshman Trevor Booker started the game at center for the Tigers, the first true freshman to start in that position for Clemson since Tom Wideman in 1995-96. He made his presence known right away after blocking an attempted runner on the first possession of the contest. He had a team-high seven rebounds in just 19 minutes of play. The Tigers had a +17 rebound advantage and also outscored the Indians 40-18 in the paint.

Clemson jumped out to an 11-2 lead by the first media timeout, only to see Arkansas State cut the lead to 16-13 with 9:29 left in the first half. From that point, Clemson scored the next 13 points to take the game over. The Tigers ended the first half on a 21-7 run, culminating with a three-point play by Potter in the final 10 seconds. Cliff Hammonds, a junior co-captain, held the Indians’ strong shooting guard Adrian Banks to just 1-6 shooting and 3 points in the first half.

In the second half, Clemson’s defensive pressure proved to be too much for the Indians, who committed 24 turnovers. The Tigers had eight steals in the second frame. Point guard Vernon Hamilton, the school’s career leader, had two thefts on the night. The Tigers scored the first six points of the second half to extend the lead to over 20 points. Clemson’s biggest lead was 40 at 81-41 after a three-point play by Matt Morris. He totaled eight points in 12 minutes of action.

The Tigers return to action Saturday to take on the Monm