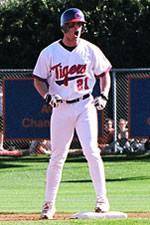 Clemson, SC- Clemson scored in every inning and downed #7 Auburn by a score of 14-9 in front of 3,197 fans at Doug Kingsmore Stadium on Friday. Clemson upped its record to 6-5, while Auburn fell to 14-2 on the season.

Jason Berken (2-1) got the win for Clemson, while starter Cory Dueitt (2-1) was credited with the loss for Auburn. Brad McCann was 4-5 with four RBIs to lead Clemson’s offense. Clemson totaled 13 hits in the contest.

Clemson added a run in the second after Andy D’Alessio scored on a groundout to second base by Herman Demmink. D’Alessio was put in scoring after Russell Triplett connected on his fifth double of the season.

Clemson extended its lead to 6-0 in the third inning. After a pair of walks, third baseman Brad McCann singled sharply past third and drove in Tony Sipp from second. Then, with two on and no outs, Lou Santangelo hit his fourth homer of the season, a three-run shot to left center field. All four of his home runs this year have been three-run shots.

Brad McCann hit his third home run of the season in the fourth inning, giving Clemson an 8-0 lead, with all of the runs coming at the expense of Auburn starter Cory Dueitt.

Berken escaped a bases loaded jam in the fifth inning. With two outs, he hit one batter and walked two others to load the bases. However, Berken got Ben Sprague to ground out to second base to end the threat. Clemson continued its offensive onslaught in the bottom of the fifth. Brady Everett hit a wind-aided homer to left field, his second of the season. Auburn responded in the sixth when catcher Josh Bell hit his sixth home run, a two-run shot to right field. Then, pinch hitter Kyle Mayo hit a sacrifice fly to center to plate Chuck Jeroloman. J.T. Williamson then hit a double in the left field corner to give Auburn four runs in the inning.

Clemson added another run in the sixth when McCann drove in his fourth run of the game, a single to left center that scored Storrer from second. Auburn cut the lead to 10-8 in the seventh. The SEC Tigers loaded the bases on pitcher Adam Walker, then plated one run on a wild pitch by reliever Robert Rohrbaugh. Auburn added a second run on a groundout to shortstop by Sean Gamble. Then, Jeroloman drove in Bell with a double down the left field line. Auburn got its fourth run of the inning on a groundout to second by Derek Sain.

Clemson extended its streak to seven consecutive innings with at least one run when Triplett hit his second home run of the year, a solo shot that just cleared the fence in left field. Auburn scored one run and cut the lead to 11-9 in the eighth, but Clemson brought in Patrick Hogan, who got two outs and avoided further damage.

Clemson tacked on the final three runs in the eighth. With the bases loaded, Everett bounced a ball to shortstop, but it was booted by Auburn’s best fielder, Jeroloman. That scored Sipp from third. Then, D’Alessio doubled to left center, giving Clemson two more runs and the final margin.

These two teams meet again Saturday, for the second of the three-game series. First pitch is scheduled for 2:00 PM.