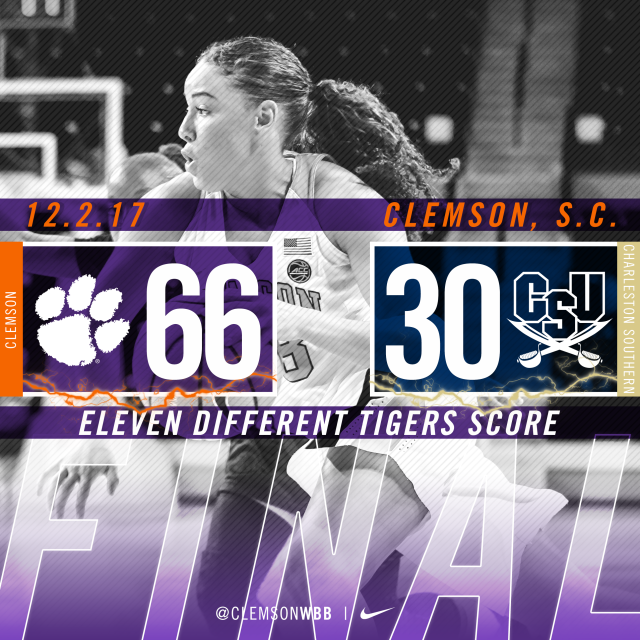 CLEMSON, S.C. – The Clemson women’s basketball team, already first in the ACC and 11th in the nation in scoring defense entering the game, put on another defensive display on Saturday, defeating Charleston Southern 66-30 at Littlejohn Coliseum. With the win, the Tigers improved to 6-2, while the Buccaneers fell to 2-4 with the loss.

The Tigers jumped out to a 20-6 lead in the first quarter, thanks to eight early points by junior point guard Danielle Edwards. A 31-18 halftime lead quickly became 55-20, after the Tigers held the Buccaneers to just two points in the third quarter, and scored 24 themselves. In fact, Clemson held Charleston Southern off the scoreboard for a span of 12:55 from the 9:49 mark in the third to 6:54 in the fourth quarter, with its largest lead of 40 points coming three minutes in to the final period.

Alexis Carter led the Tigers with 12 points, a season high for the senior. All 12 points came on free throws, where she was a perfect 12-for-12 from the line. With that performance, Carter tied the Clemson record for perfect free throw games. She joins Itoro Umoh, who did so against North Carolina on Feb. 1, 1998 as the only Tiger ever to make 12-for-12 shots from the free throw line in a single game.

Carter was one of 11 players in the scoring column for the Tigers. Edwards finished the game with 10 and junior Aliyah Collier had nine to pace the team. Sophomore Kobi Thornton pulled down a season-best 14 rebounds.

As a team, the Tiger defense held Charleston Southern to just 30 points and 18.2% (10-for-55) from field goal range. The Tigers blocked six shots in the game, including two by freshman Tylar Bennett, who now has 18 blocked shots on the season. Bennett ranked second in the ACC with 16 blocked shots entering today’s game.

The Tigers return to action on Monday, Dec. 4 on the road at Louisiana Tech. The game against the Lady Techsters will be Clemson’s third in a stretch of five days, with two of the three coming on the road in the Central time zone. (The first was a 67-66 victory at Nebraska just two days ago on Thursday, Nov. 30.) The game between the Tigers and Bulldogs tips off at 6:30 p.m. CT (7:30 p.m. ET) in Ruston, La.