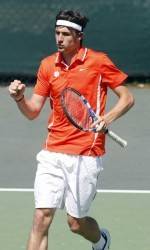 CLEMSON, SC – The Clemson Men’s Tennis Team defeated Wisconsin 6-1 on Saturday, at the Hoke Sloan Tennis Center. The Tigers rallied to win all six singles matches in the match.

Clemson dominated the singles matches recording six victories over the Badgers. Dominique Maden started things off tying the score for the Tigers with a win over Satral 6-4,6-2 in the number-three singles slot. Clemson’s #75th-ranked Yannick Maden defeated Ask 6-3, 6-3 in the top spot and Moran defeated Quinton Vega 6-3,6-4 in the number-six singles match to give the Tigers’ a 3-1 advantage.

Meza recorded the match-winning point for the Tigers with his victory in the number-two singles match with a win over Kostanov 6-3, 3-6, 6-1.

Clemson’s record improves to 3-3 as it moves forward in the season, Wisconsin falls to 2-2 this year. The Tigers’ next match will be during the Blue and Gray Weekend in Montgomery, AL, on February 25th-26th.

“It was a good win today over Wisconsin,” said Clemson Head Coach Chuck McCuen. “I’m very proud of our guys today. Wisconsin is a good team. I thought we competed hard. Our mental toughness and our physical toughness came together today. We will continue to work hard and prepare for this weekend,” said McCuen.