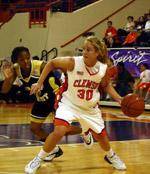 Clemson, SC-Maggie Slosser’s 21 points and a second-half box-and-one defense that limited the effectiveness of Wake Forest star Liz Strunk were major factors in Clemson’s 71-68 victory over Wake Forest Wednesday night at Littlejohn Coliseum. The Lady Tigers improved to 14-3 overall, 4-2 in the ACC with the victory, while Wake Forest fell to 8-9 overall, 1-5 in the ACC.

Slosser shot 9-14 from the field in registering her career high point outing in an ACC game. The senior from Poland, OH became the first Lady Tiger other than Lakeia Stokes to lead Clemson in scoring since December 4 when Julie Aderhold had a 22-point performance in a victory over Western Carolina, a streak that had lasted 11 games. Stokes did score 12 points, pulled down five rebounds and had four assists with no turnovers in 38 minutes of action.

Aderhold was Clemson’s third double figure scorer with 11 points, including two throws with 19 seconds left that gave Clemson a three-point advantage. Khaili Sanders had just five points, but had a game high 10 rebounds.

Wake Forest was led by Strunk, who had 17 points on 7-12 shooting. Erin Ferrell added 14 points, while Cotelia Bond-Young and Tonia Brown added 11 points apiece. Tonia Brown, who came off the bench, led Wake Forest in rebounding with seven, and she had three assists against just one turnover in a fine all-around effort.

Clemson won the shooting battle, hitting .532 from the field on 25-47 shots. It was the second best field goal percentage by the Lady Tigers this year, its best against an ACC team. Clemson made 3-5 three-point shots and had just 12 turnovers. But, Clemson made just 18-31 shots from the field and Wake Forest won the battle of the boards 37-32.

The game was close throughout as there were 15 lead changes and eight ties. But, the Lady Tigers continued their fortune in close games this year as Jim Davis’s team is now 5-1 in games decided by five points or less.

Wake Forest, who had lost four of its last five games, came out strong offensively and took a 23-17 lead 10:15 into the game. Strunk and Ferrell combined for 17 of those 23 points. Clemson battled back to take a 24-23 lead with 7:50 left in the first half on a bucket by Slosser, who had five field goals in he first half in just seven attempts.But, Wake Forest went on a 15-9 run to close the half and held a 38-33 lead at intermission.

Clemson head coach Jim Davis’s borrowed an idea from former NC State coach Jim Valvano and implemented a box-and-one defense by using a small player to guard a tall player one-on-one. Davis used point guard 5-6 Julie Talley, then backup point guard Kanetra Queen (5-8) to guard the 6-1 Strunk at the opening of the second half. Strunk, who had scored a career high 26 points in a recent loss to Florida State, had 15 points in the first half to key the Wake Forest attack.

Valvano was famous for using this strategy, including a 1990 game against Clemson when he used 6-0 guard Chris Corchiani to defend Clemson 6-11 center Dale Davis in a box-and-one. That strategory worked for Valvano 14 years ago and it worked for Davis on Wednesday night.

Clemson still had a 58-49 lead with 8:21 remaining when Wake Forest began hitting three-point shots. Cotelia Bond-Young hit a pair of threes to bring Wake Forest to within 59-57. The game was then tied at 60 on a three-point goal by Tonia Brown with 5:18 remaining.

The margin never got higher than three points the remainder of the game. The contest was tied at 60, 62, and 66 inside the last four minutes.

“I guess we should have gone to the box-and-one earlier,” said Clemson head coach Jim Davis’s. “It was effective, it got us back into the game. It was an outstanding game. Wake Forest played very well, they gave us everything we could handle tonight on our home court.

“Khaili Sanders was our top rebounder tonight, and played aggressively against Strunk when she was guarding her.”