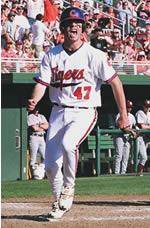 Robert Rohrbaugh recorded the win for the Tigers in 7.1 innings pitched, improving to 4-3 on the season. The sophomore left-hander gave up the first homerun of his career in the eighth inning. He had gone 86.1 innings without allowing a round-tripper. Matt Fox suffered the loss for the Golden Knights, dropping to 10-2 for the year. He gave up seven runs in 5.0 innings pitched.

Patrick Hogan struck out four of the last six batters of the game to record his 10th save of the season, becoming just the third Tiger in history to have at least 10 saves in a season. Nick Glaser had 15 in 2000 and Scott Winchester had at least 10 three times from 1993-95. The save was also the 18th of his career.

Central Florida scored first with a run in the top of the first inning. Clay Timpner led off the game with a double down the left field line. He scored two batters later on Ryan Bono’s single to left field.

The Clemson bats struck early as well though, as the Tigers scored five runs in the bottom of the first to take the lead. Travis Storrer’s followed with a single to center field, advancing Sipp to third. Brad McCann then singled up the middle to plate Sipp. Storrer and McCann scored on Russell Triplett then singled to center field to drive in Santangelo and Tyler Colvin doubled down the left field line to score D’Alessio. Clemson’s five runs tied the most UCF pitcher Fox had allowed in a game this year. He had previously only allowed three earned runs in any outing as well, but all five of Clemson’s runs were earned.

The Tigers added another run in the third inning for a 6-1 advantage. Kris Harvey led off with a single through the left side. He advanced to third base on Triplett’s double off the left field fence and scored on John Ingram’s groundball to the third baseman.

Clemson took a 7-1 lead with a run in the fourth inning. Storrer singled to center field. He advanced to second on McCann’s hit that the right fielder lost in the dusk sky. After a double steal, Harvey and D’Alessio both walked. D’Alessio recorded the RBI as he forced Storrer home.

Triplett, who graduated Friday afternoon along with Hogan and Ryan Hub, scored the Tigers’ eighth run of the game in the seventh inning. He walked to lead off the inning, advanced to second base on Ingram’s groundball to the third baseman and scored on Sipp’s blooper to left field.

The Golden Knights scored four runs in the eighth inning to cut Clemson’s lead to 8-5. Kevin Richmond led off the inning with a homerun over the left field fence. Drake Wade then singled through the left side. After Timpner flew out to the center fielder, Matt Ray hit a single down the left field line. Dee Brown singled through the left side to score Wade. Bono and Dave Lambert both followed with walks. Lambert recorded the RBI as Ray scored on his walk. Brown scored the fourth run of the inning on Chandler Rose’s fielder’s choice to the shortstop.

Clemson and UCF square off for game two on Saturday at 7:00 pm. Game three will be played at 2:00 pm on Sunday afternoon. The Tigers will honor their seniors with a pregame presentation on Sunday.