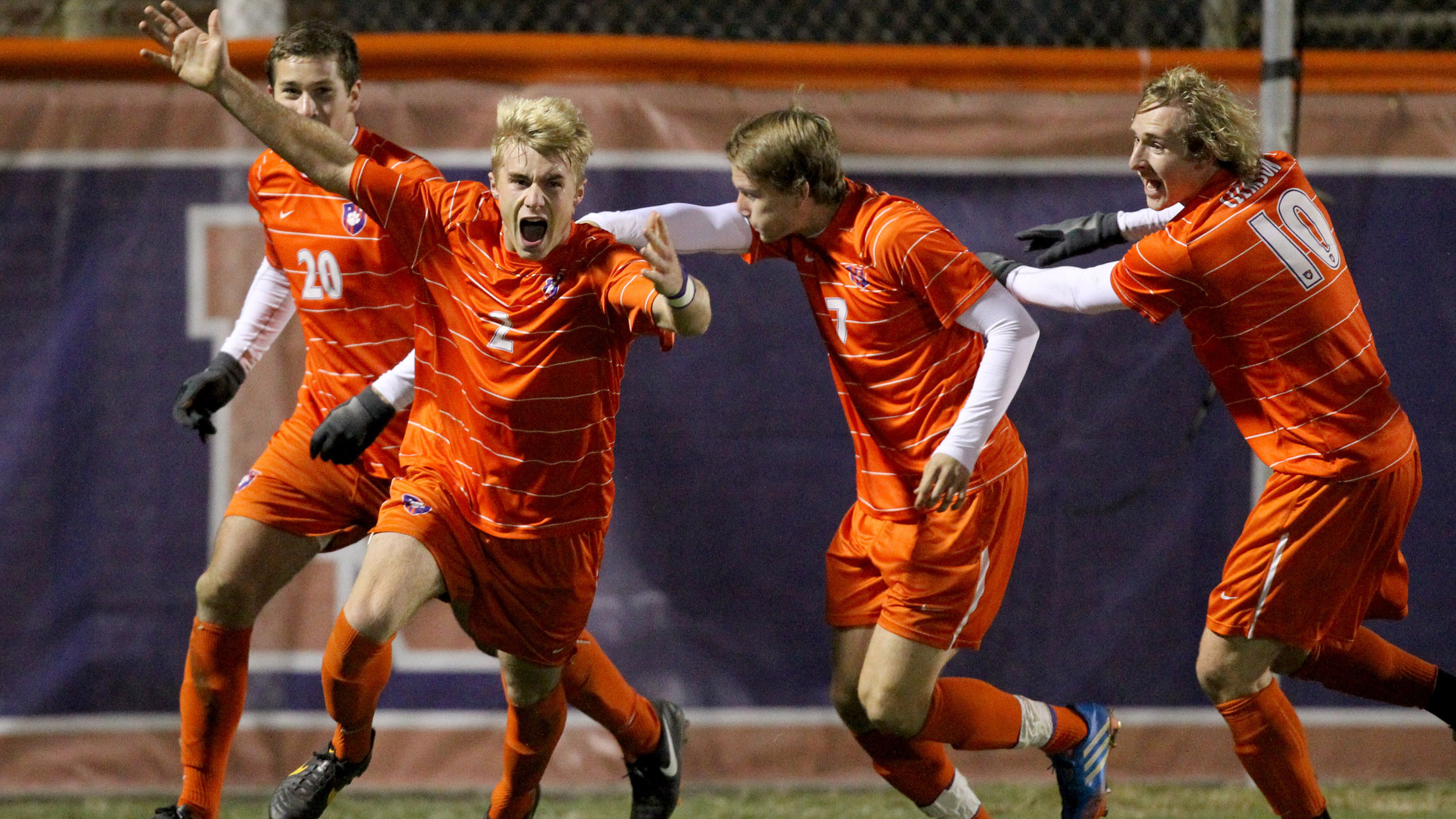 CLEMSON, SC – Clemson scored two second half goals in the last 15:00 of play as the Tigers defeated North Carolina 2-1 in the quarterfinal round of the ACC Tournament at Clemson, SC Tuesday night. With the win, Clemson improves to 11-6-2 overall, while North Carolina falls to 8-5-5 this year.  The Tigers are seeded fourth, while the Tar Heels are seeded fifth in the tournament.  North Carolina is also ranked as high as 15th in this week’s polls. The Tigers will now play Maryland in the semifinals at the Maryland SoccerPlex in Germantown, MD.  The Terrapins were 2-0 winners over Boston College in a quarterfinal match at College Park, MD Tuesday night. North Carolina scored in the first minute of play, just :29 seconds gone.  From the right side, Alex Olofson sent the ball to Vandermaas-Peeler.  He went toward the middle of the field and then sent a left-footed, 20-yard shot in the goal near the left post.  For Vandermaas-Peeler, it was his third goal of the season. Clemson evened the score with 15 minutes to go in regulation.  Manolo Sanchez played the ball from the right to Ara Amirkhanian.  Amirkhanian settled the ball with his chest and nodded it down to T.J. Casner.  Casner struck the ball from eight yards out and into the netting for his third goal of the season. “Ara fed me a great ball,” said Casner.  “I followed through and scored.  That was the best feeling knowing that I came off the bench and helped the team.” The Tigers took a 2-1 advantage in the 83rd minute of play.  Off a corner kick from the left, Thomas McNamara sent the ball to Kyle Fisher.  Fisher headed the ball in from six yards out over North Carolina’s goalkeeper Brendan Moore for his second goal of the year. “Tommy sent a great ball to me from a corner kick, and I was happy to be on the end of it,” said Kyle Fisher.  “I was so happy for the team.  The next step was to close out the game, and we did.  It was a great win.  However we need to keep pushing and move on to prepare for the next match.” Clemson dominated the game statistically.  The Tigers had 12 shots compared to North Carolina’s five.  North Carolina only had one shot on goal the entire evening and had no shots in the second half.  Clemson also had seven corner kicks compared to North Carolina’s zero. “That was a fantastic victory for us,” said Clemson Head Coach Mike Noonan.  “More importantly, it was an ACC Tournament win.  I am proud of our guys.  We stayed in the game mentally.  It would have been cruel if we hadn’t scored.  We stuck with it.  We started out the game too excited and too emotional. “Give North Carolina credit, they were ready to play, and they scored right at the start.  I think the tide turned at the start of the second half.  I thought Thales Moreno came in the match, and helped settle us down.  We must prepare for the next match, and be ready to give it our best,” said Noonan.Scoring Summary North Carolina – Cooper Vandermaas-Peeler (Alex Olofson) :29 Clemson – T.J. Casner (Manolo Sanchez, Ara Amirkhanian) 75:00 Clemson – Kyle Fisher (Thomas McNamara) 81:57   Shots:  Clemson 12, North Carolina 5 Corner Kicks:  Clemson 7, North Carolina 0 Saves:  Andrew Tarbell (CU) 0, Brendan Moore (UNC) 1 Fouls:  Clemson 16, North Carolina 14 Attendance:  1,242