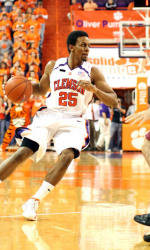 The Tigers (18-6, 6-4 Atlantic Coast Conference) scored the first eight points of the game and never trailed as they moved into a tie for third place in the ACC and improved their chances to make their first NCAA tournament since 1998.

Clemson quickly shook off any hangover from a heartbreaking double-overtime loss Sunday at North Carolina, leading by as many as 14 in the first half, before taking a 43-31 lead at the break.

Clemson won in part by making its free throws. The Tigers averaged 62.3 percent from the foul line coming in, but made 71.9 percent (23-of-32) of its attempts Thursday night.

Demontez Stitt added 13 points and James Mays had 11 points and eight rebound for the Tigers.