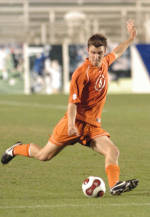 CLEMSON, SC – Greg Eckhardt scored two goals and Eric Cava had two assists as Clemson scored three goals in the final 11:48 of the match to give the Tigers a 3-2 victory over Georgia State in a men’s intercollegiate soccer match at Clemson, SC Monday night.

Michael Brooks scored the game winner with 4:13 left to go in the match. The Tigers scored three goals in a 7:35 time span.

Clemson improves to 1-1 on the year. This was the first match of the season for the Panthers.

Georgia State scored first at the 34:42 mark. Stephan Minyono sent a pass from the end line and cross the ball near the left post. Dathan Knott tapped the ball in the goal from two yards out.

Eckhardt scored for the Tigers in the 79th minute. Cava crossed the ball from the left. Eckhardt sent a 12-yard diagonal shot into the net.

The Tigers tied the score in 82nd minute. Nathan Thornton from the left. Thornton passed the ball to Eckhardt who headed the pass down from six yards out for his second goal of the night.

Brooks scored the game-winner with 4:13 left to go in regulation. Cava crossed the ball from the left to Brooks who turned and spun left and sent a left-footed shot into the goal.

“Greg Eckhardt showed a ton of heart tonight,” said Clemson Head Coach Trevor Adair. “He never gave up. We were down 2-0 and he never gave up. We continue to make poor decisions and we are not sharp. We continue to make bad mental errors. We found a way to win. We played with more intensity in the second half. I give my guys credit for not giving up, but I am not happy in the way we played. We still have a long way to go, and maybe this will help build our character.”

Clemson will play host to Georgia Southern on Friday, September 5, at 7:00 p.m. in the Tigers’ next action.