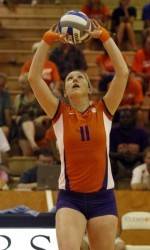 CLEMSON, SC – Clemson’s strong offense propelled them to a 3-0 (25-16, 25-6, 25-22) win over Georgia State (6-6) in Jervey Gymnasium. The Tigers improved to 9-2 on the season, and showed no signs of sluggishness after defeating conference foe Georgia Tech in five sets on Friday night.

Clemson returns to play Sunday against Florida A&M at 1:00 pm in Jervey Gymnasium. The match will be broadcast on Tigercast and Gametracker.

Lacy Hayes had 35 assists in the three sets in leading the Tigers to a .422 hitting night, the team’s best mark with Hayes guiding the offense. Natalie Patzin led all players with 13 kills and hit .323 in the match, while freshman Mo Simmons had 10 kills in 16 attacks, hitting a career-best .562.

Freshman Camila Rosado made an appearance in all three sets as a server, and recorded her first career ace in the second set, a blast off the top of the net, which dropped in front of the Panther defense.

The first set was close for most of play, with the teams trading points early on. Clemson had a 16-15 lead, and promptly went on a 9-1 run to close out the set, including a seven point run to clinch the set. The Tigers hit .290 and held the Panthers to .056 hitting, recording four blocks. Simmons and Patzin each had three in the set.

The second set was all Tigers. Clemson’s 25-6 margin of victory was the largest in school history under the current 25-point rally-scoring format. The Tigers hit .773 (17K-0E-22A) in the set, by far a season high. Hayes had 15 assists and hit Patzin for seven kills in eight attempts and Simmons with four in as many chances.

The third set was much closer, with the Tigers edging the Panthers, 25-22. With the match tied at 11, Clemson opened up a 16-11 lead. The Panthers brought it back to two points at 20-18, and within one at 23-22, but back-to-back- kills from Patzin and Adeleye clinched the match for the Tigers.